We’ve been working on new costumes non-stop this year, and two of our most fun and challenging ones are from American developer S2 Games latest 2nd-gen MOBA title, Strife.

The game recently entered Closed Beta, and boasts an array of impressive character designs reflective of it’s meta world – five different planes with varying thematics ranging from the medieval to the technologically advanced.

Here’s a quick look at what we’ve done for one of the game’s iconic characters – a psychic assassin from the plane of Vorbis named Minerva.

The design for the character meant that we had to get creative with not just body paint, but also a different variety of materials and fabrics. We’d also have to utilize LEDs to get the effects with her weapon prop just right.

Because we’re most experienced with foam, we decided to tackle the armor pieces and Minerva’s tail first. 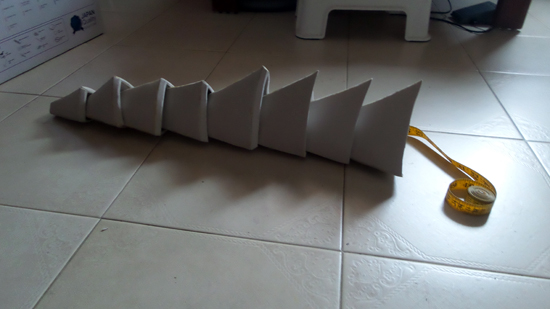 The tail was segmented out of individually cut foam triangles.

We planned for the tail to be reticulated, so it can move freely and naturally while Angelus moved. The effect was accomplished by having each individual segment slide into each other, and securing with velcro. 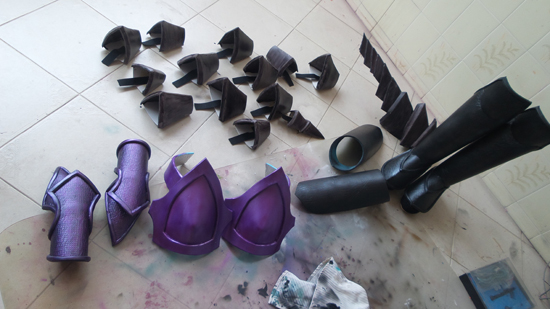 Bracers, Pauldrons, and other assorted portions of the armor. We’ve also painted the tail segments too!

Minerva doesn’t don as much armor as we are normally accustomed to, but that’s also a good thing. It means we can create a more mobile and flexible costume, so Angelus can push her poses. 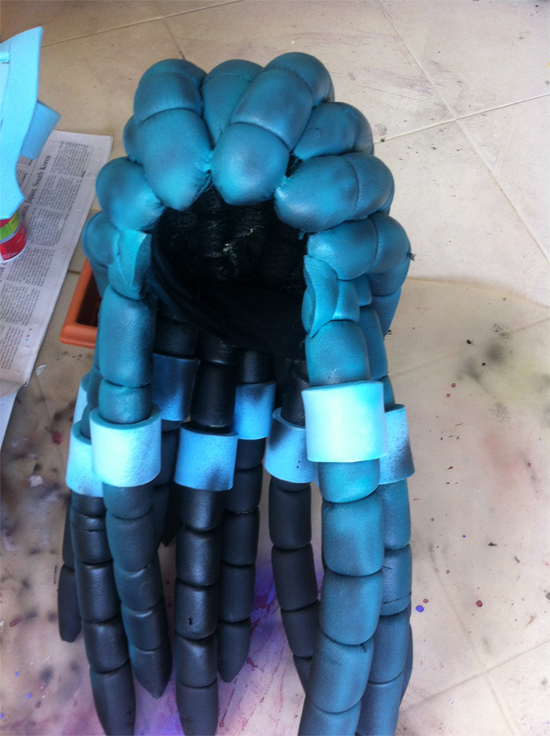 A closer look at the headdress.

Like Kerrigan’s wig, Minerva’s hair is a mass of organic tentacles. We decided that we’d build a headdress out of foam tubes layered over one another, joined to a knit mesh that’s normally used for sewing wig wefts.

As for Minerva’s body suit and jacket, they were built as separate pieces. The jacket was crafted from pleather, with additional panels to create the cape-like structure behind her. 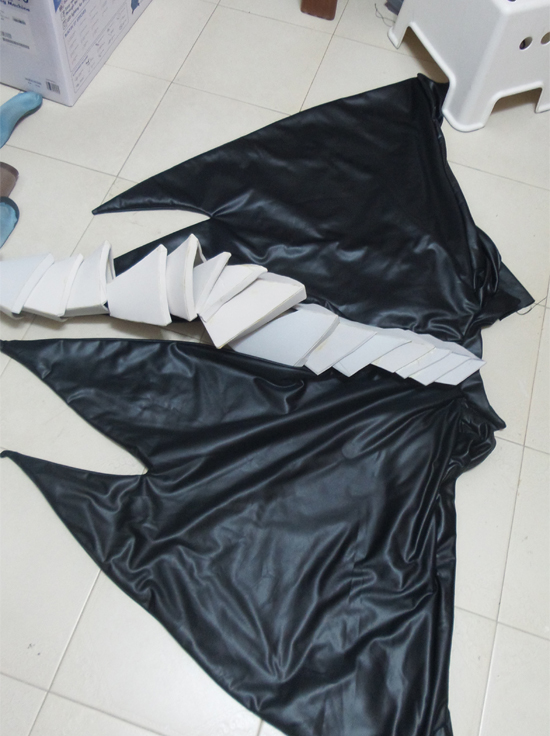 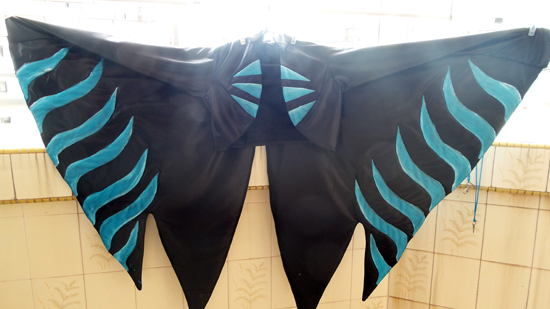 Then there was Minerva’s polearm. It was made to be detachable so we could ship it over to PAX in a supply case, and LEDs were inserted to give it a cyan glow. 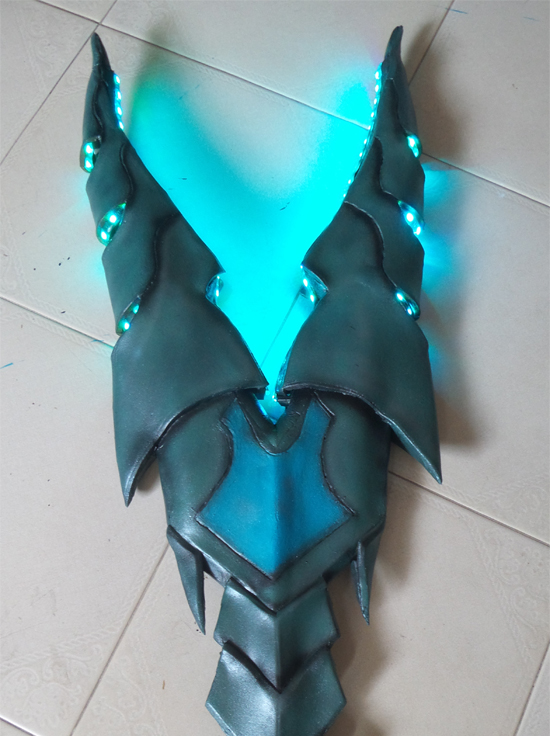 The base was also crafted from foam to keep it lightweight. XD

Then there’s also the body paint, which we think is probably the hardest part. ^^;;

Getting a finish that doesn’t run in a convention (which requires a lot of dabbing and powdering down) is hard work. The make-up alone takes about an hour! 😮 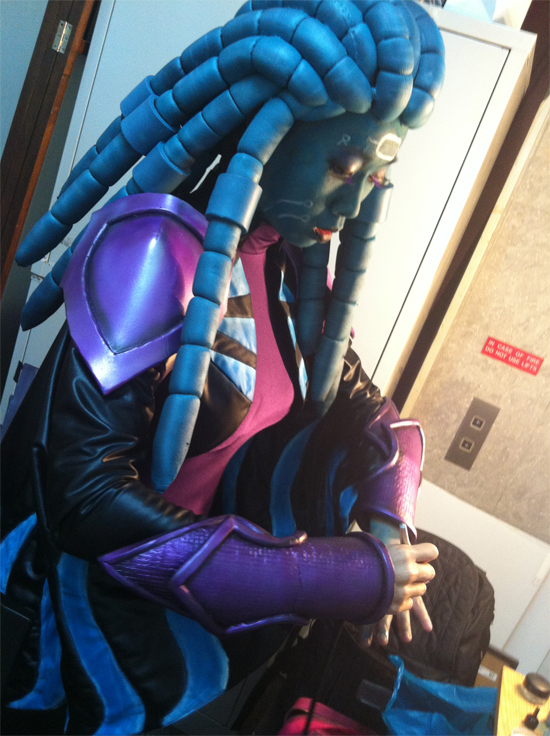 Using an airbrush to apply body paint is tricky, but it creates a more even tone compared to hand brushing. 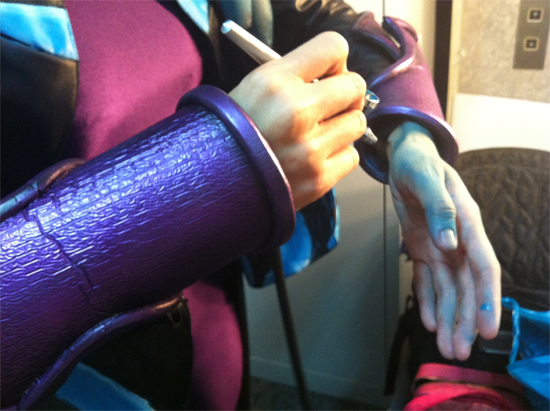 And here’s the completed ensemble from our studio preview. 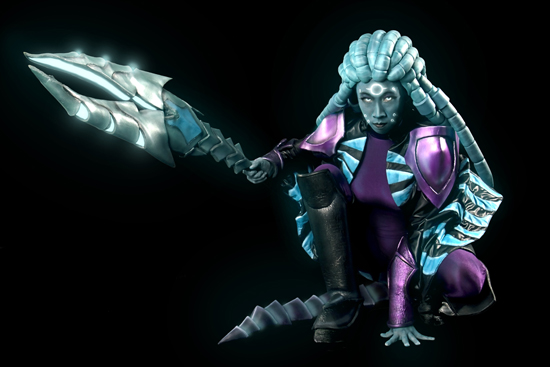 Don’t forget to leave a comment so we know what you think of Angelus’s costume.

We’ll also be blogging about our work on Crimson’s MidKnight cosplay, an armored warrior who made his debut in the Strife comic book next week!