When we were invited to help S2 Games bring characters from their second generation MOBA Strife to life through our cosplay,  we were thrilled.

We’d read the Strife comic preview, and while Angelus had gravitated towards Minerva, I’d fallen instantly in love with MidKnight.

The High Marshall from Tempra had made a pretty big impression. Here was a complex character with a villainous streak, and in some really sweet armor, no less. The only catch – he wasn’t a playable character in the Beta yet, so there were no released game assets we could use as a reference.

With the character designer’s blessings though, we got the greenlight to go ahead, using a combination of the comic art, some sketches, and a few concept renders as the inspiration. 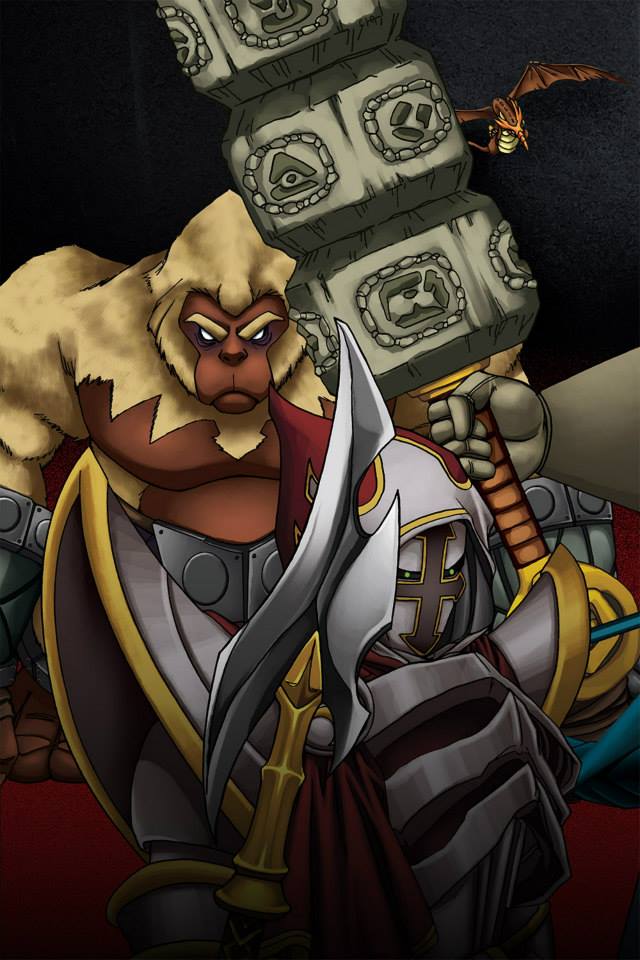 MidKnight, as featured on the back page of the Strife preview comic. 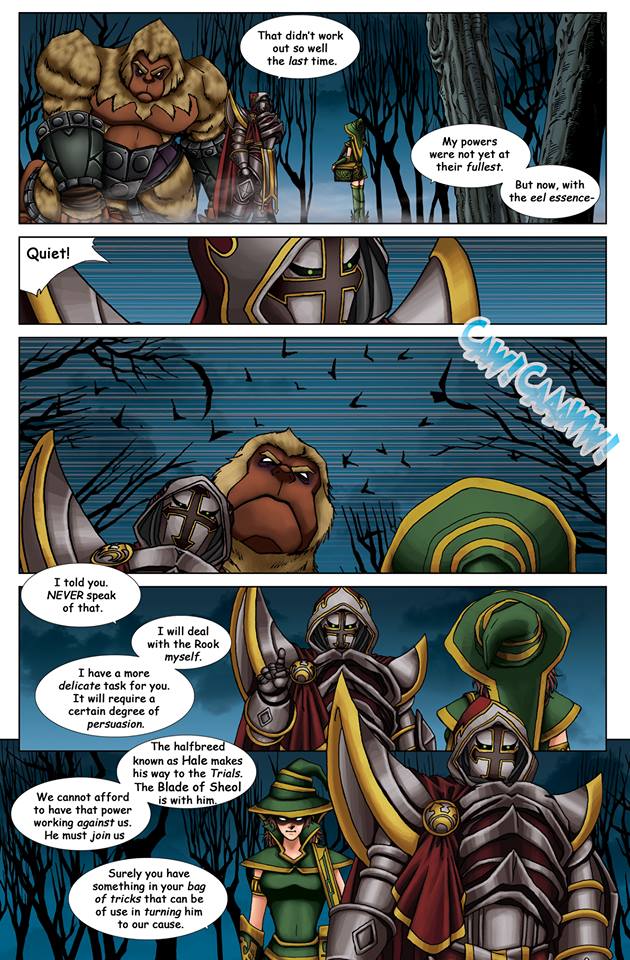 Another image of MidKnight, this time from the second chapter of the comic.

With so many references to choose from, we decided that we would aggregate the best elements of each of them, and started working on crafting armor pieces out of foam.

Foam building might seem pretty arcane at first, but a lot of it is really about visualizing, drawing and cutting out the right basic shapes.

Creating curves, details and textures on armor is probably our favorite part. Foam is an incredibly versatile medium, and because it’s so pliable, is capable of forming some really interesting shapes. 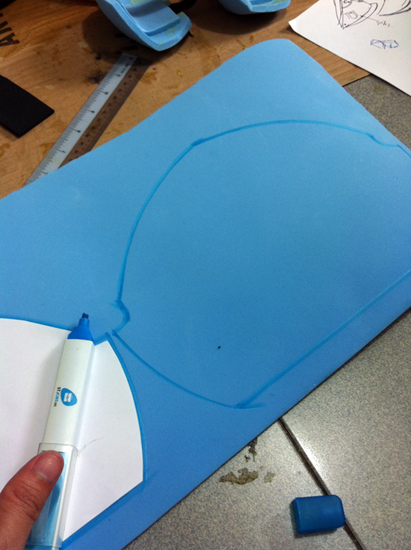 We’ll break down the shapes into temporary paper patterns, and replicate them on foam with a highlighter or marker. We then cut them out, and paste them together with contact glue. 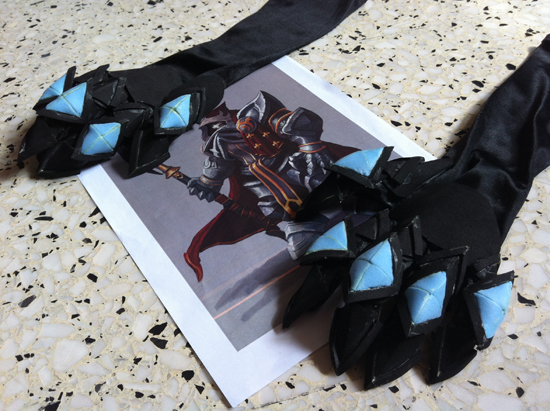 The gauntlets were built from EVA foam of varying thickness and a pair of satin gloves. 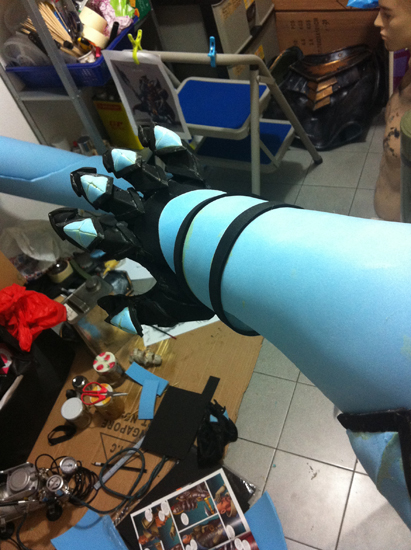 Gauntlets and bracers. Did you know MidKnight’s design is asymmetrical? He wears a different bracer on his other arm. XD 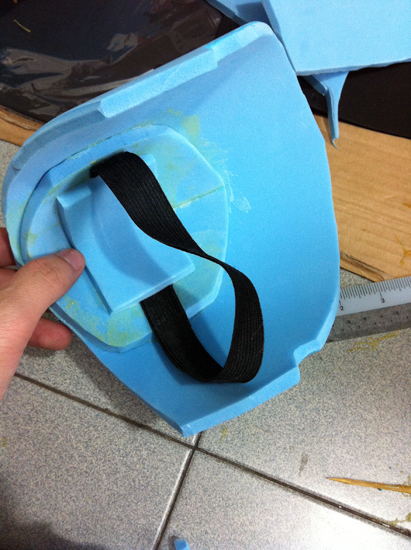 Adding elastic straps to help secure armor pieces in place is a pretty big part too.

Creating the individual pieces took the better part of two weeks. Here’s a look at some unassembled armor pieces, placed side by side for comparison. 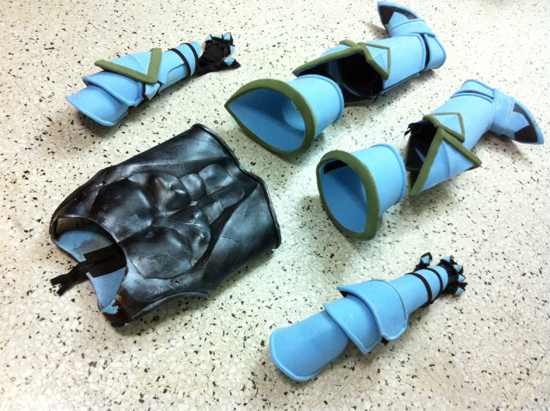 Various armor pieces. Only the chest piece is painted for now, and even then with only one base layer. 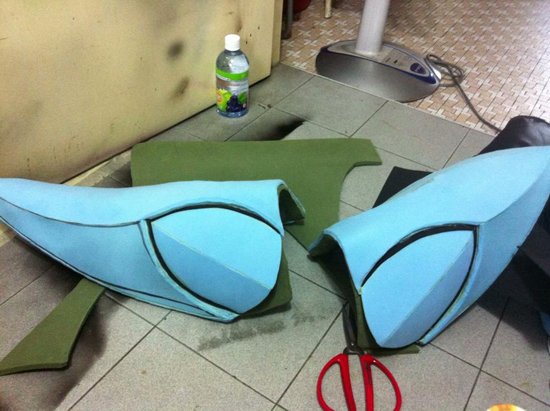 Pauldrons for the costume. One’s actually longer and curvier than the other. 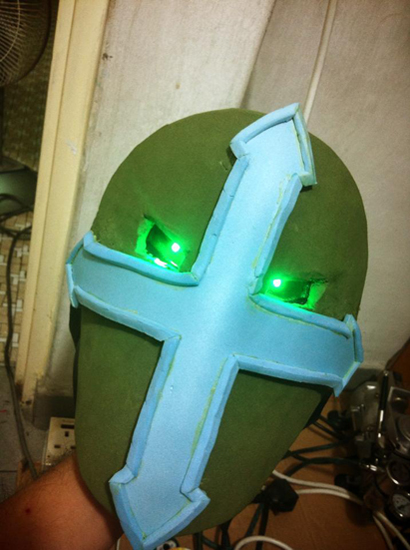 To simulate MidKnight’s eye glow, we incorporated LEDs into the helmet. 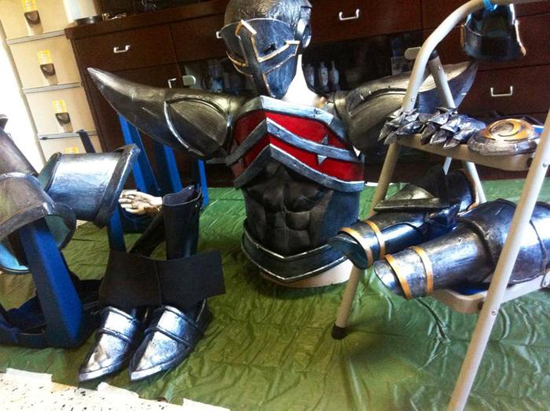 And here’s how it looks with a proper paint job and embellishments.

Like Minerva, MidKnight is also a pole arm user. We designed his weapon in three parts, so we could dismantle it for easier shipping. 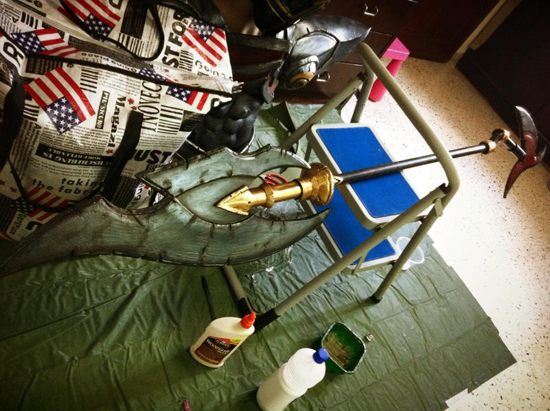 MidKnight’s weapon, also made out of foam and rubber.

MidKnight’s costume also entails additional cloth portions, such as a tabard, cloak and costume base. Because he’s essentially a medieval knight, we felt that he should wear chain mail beneath the plate armor, and simulated the effect with some mesh cloth. 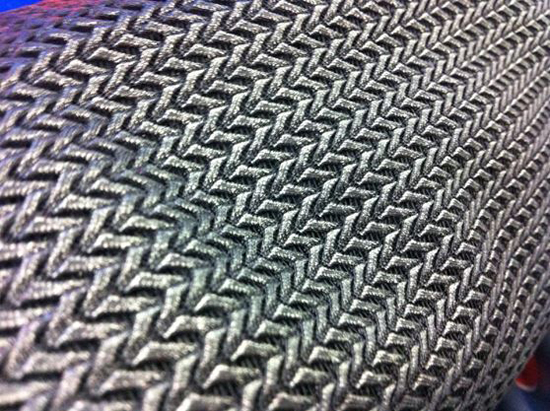 We also utilized some really drape-y fabrics for the cloak so we could convey a sense of majesty and volume when the cloak billows. 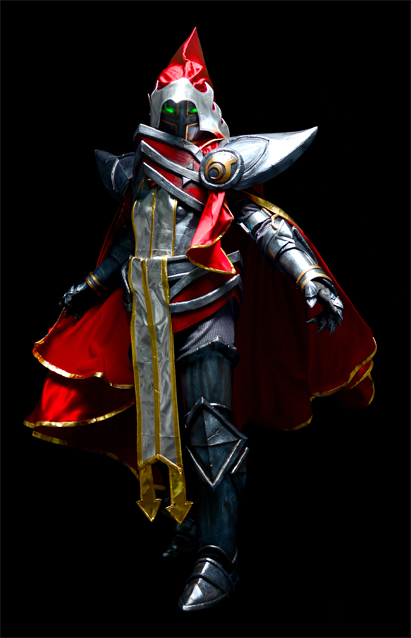 Here’s the costume in action during our studio preview.

What do you think? MidKnight will be walking the con floor on Saturday, so if you’d like to trade coscards, be sure to come say ‘Hi!’.

We’ll be at PAX East next weekend to guest-judge the cosplay competition and promote for S2 Games in room 159, so be sure to look for us there too!