Catching The Avengers: Age of Ultron with Subway Singapore

The Subway brand has always been pretty forward looking with their marketing, having supported fashion shows, concerts and independent film makers. That’s why we weren’t surprised, and were even a little impressed when Subway Singapore decided to work the pop-culture angle.

Apart from releasing a hilarious TVC featuring their latest tuna bacon melt, the company also called upon fans to partake of an online contest to win tickets to The Avengers: Age of Ultron. Cosplayers were also invited to attend the screening in costume (kudos to the good folks at Here Be Geeks for making this happen), and all in all, this made for a pretty interesting evening. 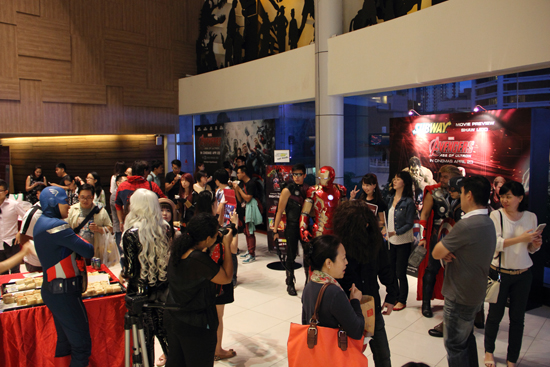 Superfans and cosplayers mingling at the event area just before the screening. 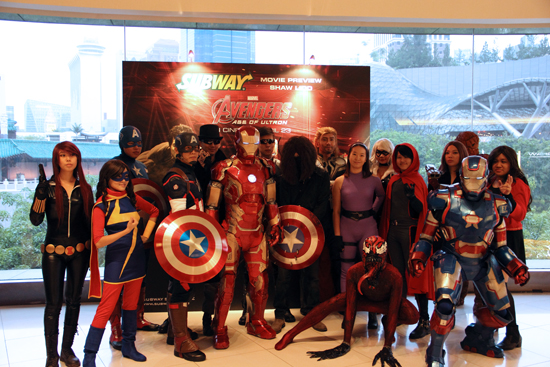 We spotted some of our awesome cosplay friends. Sadly, Ultron didn’t put in an appearance. 🙁

As for the movie proper, we’re going to give you the lowdown and hopefully keep it as spoiler-free as possible.

The Avengers: Age of Ultron is the sequel to 2012’s big hit, and picks up following the dissolution of S.H.I.E.L.D. Tired of all the fighting and hoping to create a lasting peace, Iron Man Tony Stark decides to mess with powers beyond his ken and this leads to the creation Ultron, a sentient peace-keeping software.

The program soon runs-amok, and the team comprising Black Widow, Captain America, Hawkeye, Iron Man, The Incredible Hulk and Thor have to band together to stop him. Along the way they encounter Pietro and Wanda Maximoff (Quicksilver and Scarlet Witch), and in true comic book fashion, the good guys eventually win but at great cost.

Needless to say, the movie is formulaic. It fits the mould of Marvel’s Cinematic Universe (MCU) movies to a T and is laden with action, top-notch CGI and special effects (we especially loved the Hulkbuster moments). Hardcore comic book fans might notice that Ultron’s origin story deviates from the original, but that’s something I’d forgive considering everything else.

For an ensemble movie with such a large cast, Joss Whedon does a brilliant job of telling the story. The pacing, even if it’s a little forced at times, also kind of worked in his favor.

The film opens in-media-res with a massive raid on a Hydra base in Sokovia, and the action doesn’t really let up. That’s why I’m especially glad for the small pockets of peace and contemplation that take place between the fighting and explosions.

These scenes give more emphasis to characters like Jeremy Renner’s Hawkeye (whom I’d like to call the most death-flagged character in MCU history), and helped develop the burgeoning romance between Bruce Banner and Natasha Romanov.

Fans of course can also expect easter eggs galore, and more than a few tie-ins to happenings in other franchises (such as Agents of S.H.I.E.L.D). There was plenty of foreshadowing as well, and we know for a fact that The Avengers are all set for The Infinity War when it releases in 2018.

Overall, it’s a great geek fix for this weekend.

If you haven’t yet, check out the trailer below: