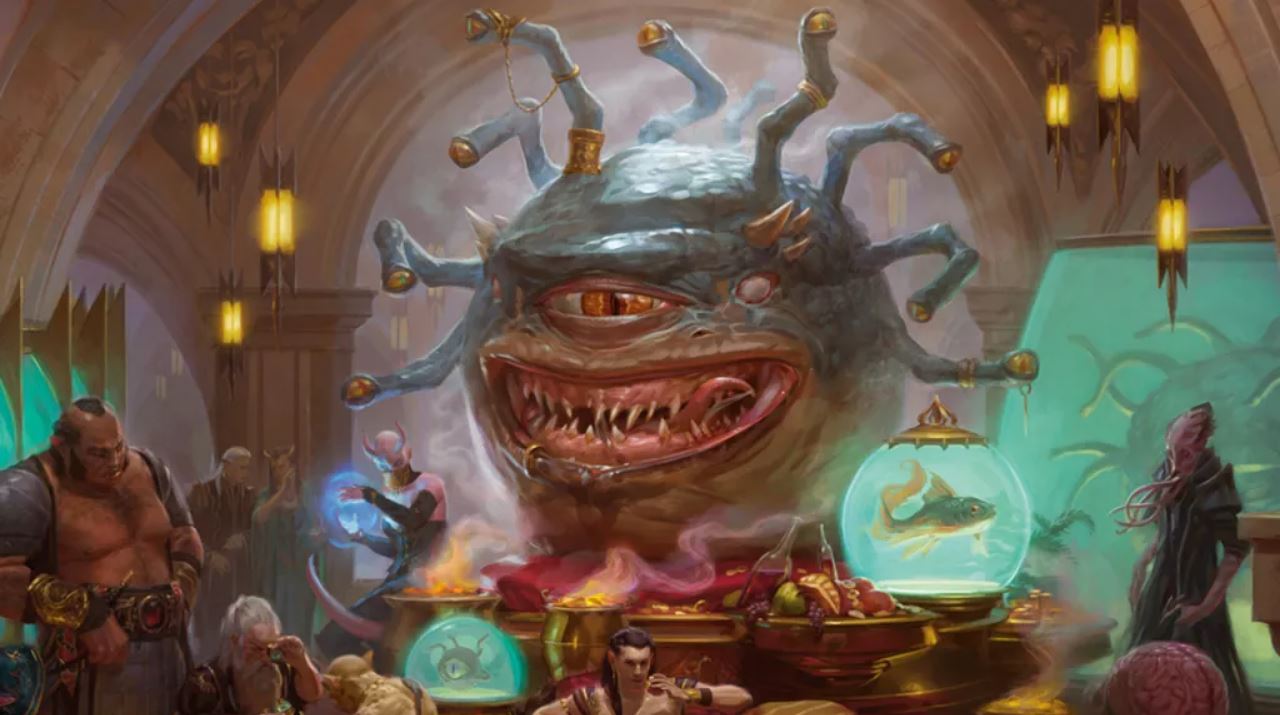 If you’ve been following our geeky endeavors, then you’ll know that we don’t just do Dungeons & Dragons. We also play lots of Magic: The Gathering.

That’s why we were doubly excited that some of our favorite NPCs from hardcovers such as Waterdeep: Dragon Heist and Tomb of Annihilation were showing up in Adventures in the Forgotten Realms, and that quickly got us thinking – what if we built some themed EDH decks to celebrate, using what we’ve got in the office?

Here’s a quick one based off Xanathar, an iconic beholder villain who heads a veritable guild of killers, smugglers and cutpurses, and has an eyestalk in every evil pie.

Suffice to say, there’s a reason why Xanathar is still guild master. He’s got 5 power and 6 toughness, which means he’s capable of snuffing out most underlings itching for a promotion. His ability to stop an opponent from casting spells is also reminiscent of the antimagic cone projected by a beholder’s central eye, and being able to play their cards is likely a nod to one of their other eye powers – that of the charm ray.

Xanathar’s Guild is big on larceny and vice, and that’s why we decided to go big on the roguish element, with a splash of fun shenanigans like gaining control and mill. Players of more recent sets will see a few familiar faces like Gonti, Soaring Thought-Thief (they’re either Thief Acrobats or Arcane Tricksters), Thieves’ Guild Enforcer (yep, Xanathar’s got lots of hired muscle) and Zareth San.

Other fun cards like Herald of Hadar, Krydle and Yuan-ti Malison (all appearing in this new set) add to the flavor and round the deck out with some utility. The Herald is a great sink for infinite mana, while Circu and Consuming Aberration can work with Dramatic Reversal and Isochron Scepter (see below) to mill your opponents out.

Lots of rocks, as befits the treasury of one of the most wealthy criminal organizations in the Forgotten Realms. Their agents are also some of the most well provisioned, so it wouldn’t be surprising to see them armed with Thieves’ Tools (which all rogues are proficient in). The Goldvein Pick and Prying Blade help generate additional treasure tokens (yes, these rogues are gold diggers), and that Isochron Scepter (which you can search for with a Tribute Mage) is both insurance, as well as a combo enabler.

The deck is beefed up with a handful of thematically appropriate instants and sorceries to protect Xanathar, punish interlopers, or make an example of the guild’s enemies by making them sleep with the fishes. Dramatic Reversal on the list stands out as an option for the Isochron Scepter, and can generate infinite casts and infinite mana with enough rocks on the field. After all, any self-respecting villain should have a way to turn the tables on those pesky adventurers traipsing through your lair, right? Fascination is a viable sink for infinite mana that can be tutored for using Muddle the Mixture, rounding out your combo win-cons.

Class cards are a new enchantment type, and you’d expect everyone in Xanathar’s Guild to have maybe one or two Rogue levels. Also, Revel in Riches is mandatory for a stylish alternate win-con as befits the most glamorous beholder of all.

Duskmantle and Nephalia Drownyard evoke memories of Skullport, where Xanathar’s Guild holds sway, while Rogue’s Passage is just too flavorful not to include. Depending on whether you prefer Waterdeep in the Springtime (which is the season you’ll face Xanathar in Dragon Heist) or in the winter, pick either Snow-Covered or regular lands.

The cards in this section are included as an option for players who prefer a little bit more bite to their deck.

Helm of Obedience, together with the Dauthi Voidwalker or Leyline of the Void, can disintegrate an opponent’s deck, while Mind’s Dilation can nab you another spell each turn. Cards like Desertion too would make a fine addition. After all, if Xanathar makes an offer, who can refuse?

Also, if you want to give the tie-in module for Adventures in the Forgotten Realms a shot, you can check it out here! It’s a neat little dungeon crawl, and we’re certain you’ll love it!

The Dungeons & Dragons Adventures in the Forgotten Realms set for Magic: The Gathering releases 23 July 2021. If you’re a D&D fan who’s always wanted to get into spell slinging, you can snag some packs at your favorite local game store.