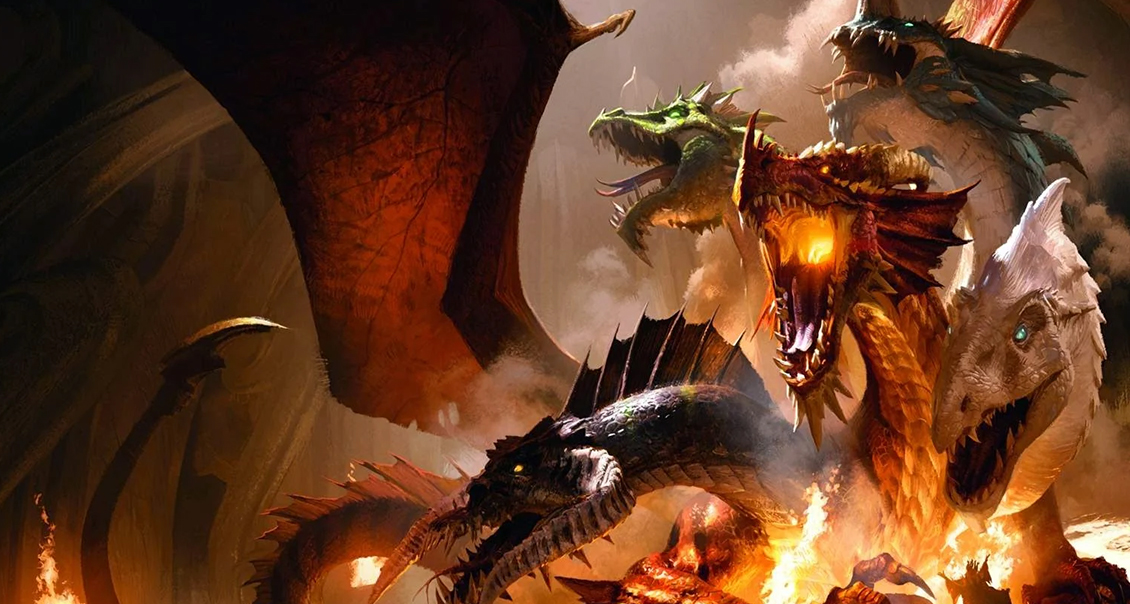 Tiamat is a being that is practically synonymous with Dungeons & Dragons. She is the ancient progenitor of the chromatic flights (making her the bona fide mother of dragons), and a deity who commands vast power in the Forgotten Realms. The Church of Tiamat is one of the established faiths in Faerun, and her followers in the Cult of the Dragon are nefarious plotters ever striving to further her dark agenda.

Since Tiamat is the subject for this week’s deckbuilding column, we decided that we had to do things a little different. Rather than simply picking thematically appropriate cards, we’ll be taking this a step further by trying to stick as closely to the events of the Rise of Tiamat hardcover adventure as possible (though some creative liberties must be taken), without busting our budget. If you’re currently playing this adventure, or intend to play it in the future, be warned! There may be spoilers!

At it’s core, this deck is a dragon tribal. In addition to several cards from the latest D&D Adventures in the Forgotten Realms set and Draconic Rage Commander Deck, we’ll be busting out pieces from the Tarkir sets – which had some of the most flavorful, dragon-themed cards ever printed.

Like our Xanathar and Volo lists, we tried to use a pool of cards that D&D fans thinking to get their feet wet might be able to find. The upgrades section expands on this pool, with more power cards from older sets.

Tiamat tutors for five Dragon cards with different names whenever you cast her. This also means that every time you summon her from her prison lair in Avernus (i.e. the Command Zone), you get to fill your hand with lots of new threats.

Sure, she doesn’t have all the powers of her CR 30 form, but she’s no slouch in the power and toughness department. Her 7/7 body allows her to overwhelm most creatures native to the Forgotten Realms, and she can definitely swing to win if you need to push damage.

In Rise of Tiamat, there are dragons. Lots of them. The characters contend with several throughout the course of the hardcover, and even dragons from the metallic flights (the goodly dragons who are children of big brother Bahamut, with whom Tiamat has some serious sibling rivalry issues) eventually join in the fray.

Since Tiamat is all five colors, we settled on dragons that are impactful, regardless of their color identity. There was only one caveat – they had to be depicted in the art as one of the five colors of Tiamat’s children.

The Adult Gold Dragon, Amareth, the Lustrous and Scion of the Ur-Dragon may aid heroes hoping to thwart Tiamat’s plans, but even they can be cowed by her presence and pressed into service.

The characters are in a race against time to prevent the Cult of the Dragon from summoning Tiamat. Combined with the relics and powerful treasures (read Artifacts) they have amassed, these cultists accelerate the approach of Tiamat or one of her numerous children.

In Magic: The Gathering lore, the Tarkir planeswalker Sarkhan Vol is a bit of a dragon otaku, which makes him the perfect candidate for leadership in the Cult of the Dragon. All his loyalty abilities either help you ramp into casting a dragon spell, produce dragon tokens, or get you dragons faster, which suits Tiamat’s purpose just fine.

Now, all he needs to do is to change his name to Severin Silrajin, and he’d fit right in!

The adventure begins at the sound of the Draakhorn, a gift from Tiamat to her allies during the war between dragons and giants in ages past. In the absence of such a mighty relic, the Herald’s Horn serves in its stead. This set also introduces the Orb of Dragonkind, long a part of D&D lore, which serves to filter mana in the early game, and can be used to find a helpful dragon.

Amassing a veritable Dragon’s Hoard to please the Dragon Queen is all part of the Cult’s plans, and it’s entirely plausible that this stash of treasure includes baubles like the Arcane Signet and Sol Ring.

The Icon of Ancestry can be helpful as a mini anthem that also lets you sink excess mana to dig three deep.

The ramp spells here reflect how quickly the Cult of the Dragon swept across the Sword Coast, and how, during the events of Rise of Tiamat, they’re still gaining ground. Instants and sorceries like Crux of Fate, Draconic Intervention, and Klauth’s Will can sweep away pesky adventurers, while an Earthquake (which wrecks the location in the final scene) can also lay opponents low.

Banefire is a plausible late game mana sink, Descent of the Dragons can potentially cement Tiamat’s victory under the right conditions, and assuming you have enough dragons in the graveyard, Patriarch’s Bidding (surely the work of Szass Tam of the Red Wizards) can bring them all back at once, potentially resulting in a quick and sudden win.

Dragon Tempest is a haste enabler that also makes every dragon (including tokens) entering the battlefield ping for damage, as does Sarkhan’s Unsealing. Sarkhan’s Unsealing turns those dragons into a burn that can go face, and every cast of Tiamat into a guaranteed board sweeper.

Frontier Siege and Palace Siege are included for their flexibility (and not just because they’re reminiscent of some parts of the adventure), while Garruk’s Uprising and Temur Ascendancy reward you for going big with card draw.

Temple of the Dragon Queen is a flavorful auto-include in this deck, while Path of Ancestry and Unclaimed Territory can help with generating colored mana for your dragon spells. Haven of the Spirit Dragon has some handy utility, and The World Tree can further fix any mana issues. Though the Thriving lands (such as Thriving Isle) come into play tapped, their usefulness cannot be underestimated.

Unsurprisingly, enhancing the deck means getting your hands on nastier dragons that can synergize with the deck (and some would be cultists that can support them).

Fist of Suns and Morophon are one way to make Tiamat and her brood cost practically nothing, Cavern of Souls can help make your dragons uncounterable, and better real estate like the Triomes (or shocks and fetches) can beef up consistency where mana is concerned.

Descendant’s Path and The Prismatic Bridge can get more dragons on the table quickly, Reflections of Littjara lets you make additional dragons (some of which no doubt possess enter the battlefield effects), and Steely Resolve can keep those dragons protected.

The Dungeons & Dragons Adventures in the Forgotten Realms set for Magic: The Gathering is currently available at your favorite local game store! If you’re a D&D fan who’s always wanted to get into spell slinging, you can snag some packs by checking out the link!