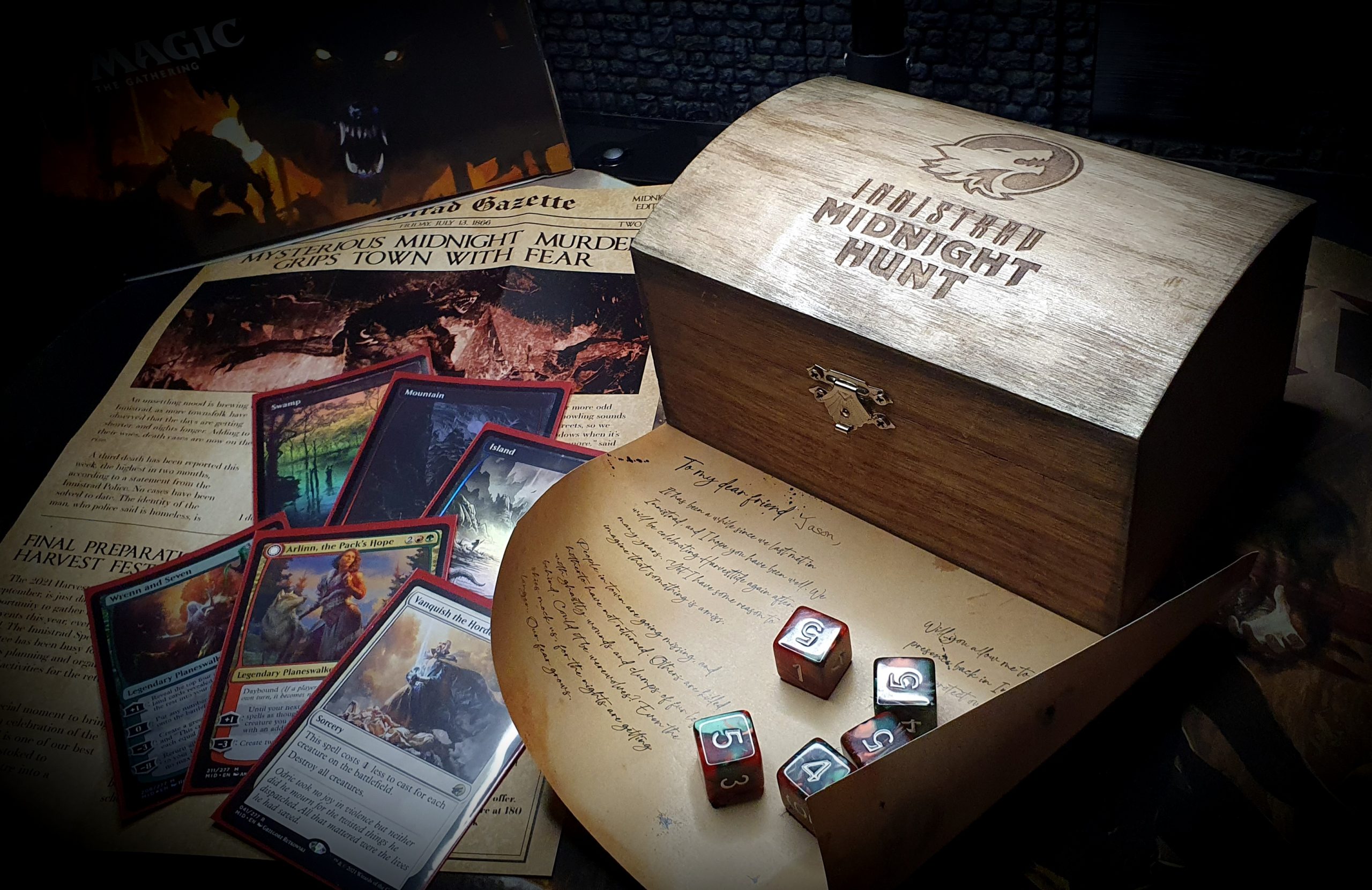 It’s no secret that we love Magic: The Gathering, and slinging cards is one of our favorite pastimes.

We also love gothic horror, vampires and werewolves, and that’s why it should come as no surprise that we jumped at the chance to crack open our box the minute we got our paws on the media drop for Midnight Hunt.

This set is the 89th expansion in MTG’s illustrious history, and the sixth to take us back to one of our favorite planes in the MTG multiverse. Much of the lore of this expansion focuses on the growing unease of the populace, strange happenings, and the increasingly longer nights and shorter days plaguing the realm in the wake of its angelic protector’s demise.

Iconic Planeswalkers like Arlinn Kord, Teferi, and Wrenn (and Seven) feature in this set, and we expect emo edgelord vampire Sorin Markov to make an appearance in Crimson Vow, to be released sometime in November.

Double-faced cards are a staple in this set, with the Daybound/Nightbound and Disturb mechanics. Midnight Hunt also introduces Coven, a keyword on creature cards that has serious witchy vibes, and brings back keywords like Flashback, which lets you cast a spell from your graveyard for the listed cost.

We were also lured in by the new cycle of Hunt lands (a special land type introduced with this set) and the Eternal Night basic lands from this set, which are all rendered in lovely black and white style (just the way we like it) with glossy color-specific borders that look especially gorgeous in foil.

Needless to say, we had fun cracking open our box, and we pulled some pretty cool things to boot.

Check out our unboxing video and some of our spoils here:

We’ve also decided to put together a Commander deck revolving around one of our favorite cards this set – the Triskaidekaphile.

This mad mage looks like she really loves the number 13, and with just how much we love our jank and flavor wins, looks like the perfect insert into a wizard-y Mono Blue deck themed around alternate win-cons.

Kefnet’s got flying, indestructible and helps you draw a card – all great options for a blue deck. You’ll be holding onto a fistful of cards most of the time, so hiding behind his 5/5 body is quite viable too.

Wizards are one of the most interesting archetypes in the game. They bring their own brand of magic to the table, and many of them can help you draw cards, or have an added effect that can help generate some form of advantage, whether it is creating tokens (Talrand and Murmuring Mystic), or comboing with another card or two to generate infinite triggers and mana (Naru Meha), or disrupting your opponent’s board (Venser).

Also included in the mix are creatures that might serve wizards as pets or protectors like the Displacer Beast from Forgotten Realms, which is a viable mana sink for when you go infinite (be sure to pick Lost Mines of Phandelver as your dungeon of choice and Dark Pool as a room option), as well as creatures that work in tandem with other cards in the deck to pressure your opponent.

Your alternate win conditions are also here in the form of Laboratory Maniac, Thassa’s Oracle, and Triskaidekaphile (featured above).

These planeswalkers are all fairly low costed and somewhat powerful, with Jace adds to the pool of alternate win conditions. Narset is also a bit of a troll card when she’s on the field with Teferi’s Puzzle Box.

This list has ramp to help accelerate your plays, as well as the Isochron Scepter (for the Dramatic Reversal combo), Knowledge Pool to lock your opponent down (when paired with Teferi, Mage of Zhalfir). Aetherflux Reservoir can help you close games if it’s on the board and you have no other use for that Dramatic + Isochron set up. How’s nuking your opponent from orbit sound?

These are pretty straightforward. You’re going to get beaten up a lot, and you don’t really want to make too many one sided trades with your wizards, so that’s where Propaganda and War Tax come in. Wizard Class helps you extend your hand size and also makes your wizards swole later on, while Mechanized Production can help you win the game out of nowhere (just cast it on Darksteel Citadel or Seat of the Synod).

These spells help you draw into answers, counter those of your opponent’s and generally make their life miserable. Blue Sun’s Zenith helps you deck out an opponent (if you’ve got infinite mana), and both Hinder and Spell Crumple work with Tunnel Vision to kinda do the same (as long as they don’t have a way to shuffle their graveyard back into their library). With your commander on the field, Time Warp, Mystic Sanctuary and adequate mana, you can also go into infinite turns, allowing you to get all sorts of shenanigans going.

Our go-to lands these days are snow-covered, but you’re welcome to choose your flavor of island (or use those lovely Eternal Night ones from this new set). Maze of Ith can buy you some time by taking an attacking nasty out of the picture, and Reliquary Tower can help bump up your hand size. Riptide Laboratory can be used to bounce those wizards, and if you ever go infinite with Naru Meha, that Sunscorched Desert flickering like a mirage can give your opponent a terminal case of heatstroke.

Upgrading this deck means loading up on some of the most sought after cards in Blue. Things like Cyclonic Rift, Fierce Guardianship, Force of Will, Snapcaster Mage and so on may have a place in the deck. Enter the Infinite, Omniscience and the various spells that grant extra turns are also popular choices. Finally, consider some extra flicker style spells that work with Naru Meha and other creatures on the list, more efficient rocks, or even some mill options.

You may also want to consider more targeted counters like Dispel, generating lots of mana with Deadeye Navigator and Peregrine Drake (or Palinchron), together with High Tide or Nykthos, and cards like Prosperity or Folio of Fancies to sink your mana into.

And there you have it! We hope you enjoyed our unboxing video and our deck build as much as we did brewing it for you. If you decide to build this deck, be sure to let us know how you do with it!

The Innistrad: Midnight Hunt set for Magic: The Gathering is currently available at your favorite local game store from 24 September 2021! We suggest you get your paws on them before they run out!