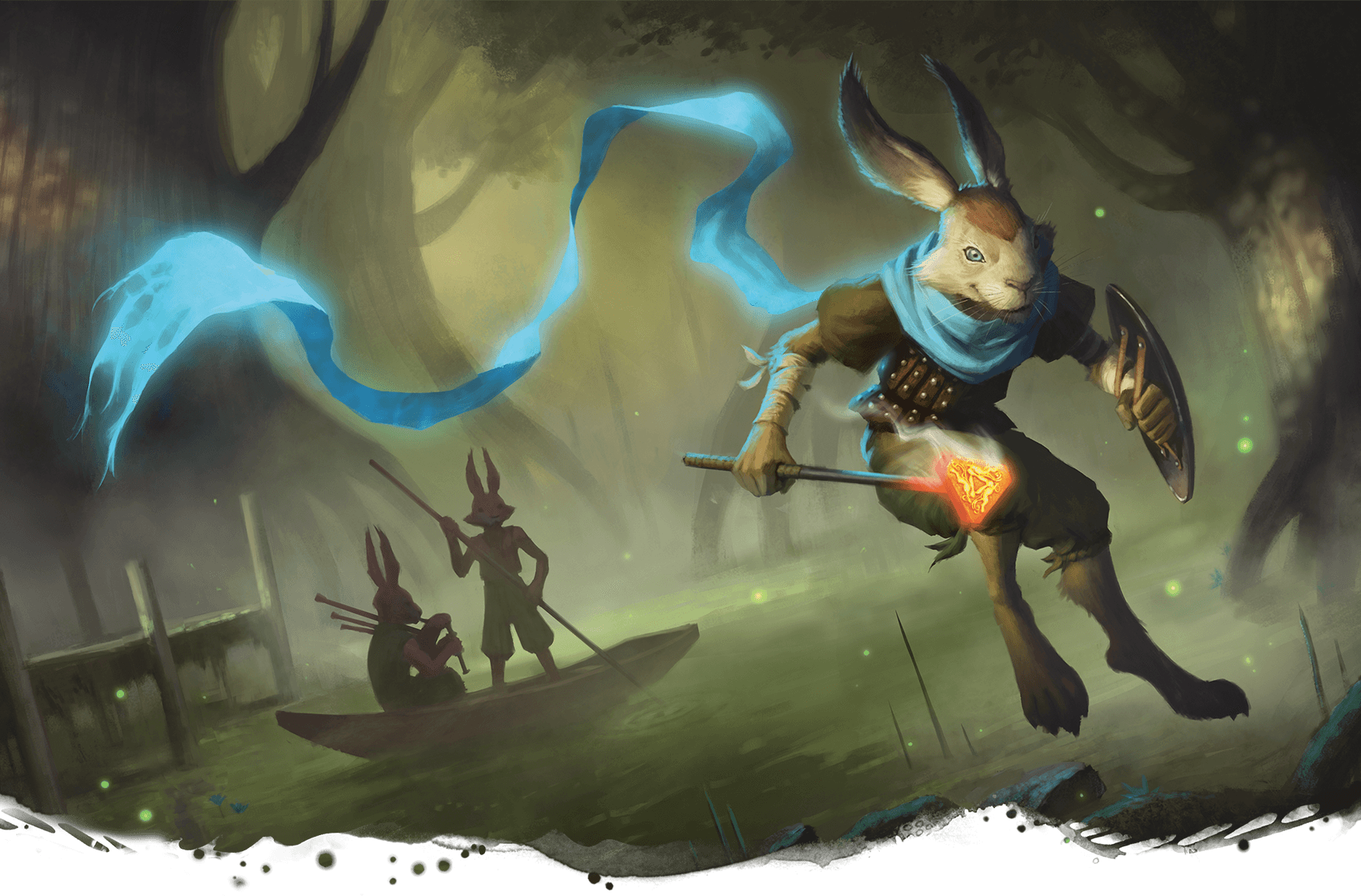 We just got our hands on our copy of The Wild Beyond the Witchlight, and boy are we impressed. This latest adventure brings characters on a wild and whimsical romp through the Feywild (D&D’s version of fairyland) that starts out glitzy, but gets kinda dark pretty quickly.

The TL;DR of it is that The Witchlight Carnival, which visits the characters’ home world once every eight years is also a portal into the fantastic realm of Prismeer in the feywild, and the book presents several gripping reasons for the characters to get there. One of them’s a typical, heroic quest, while the other involves each characters’ childhood, but you’re also free to make up something appropriate to your playgroup.

Once there, the characters get thrust into the center of a conspiracy involving three hag sisters and the fairy godmother-esque ruler of Prismeer, who has been trapped in time by powerful magic. Talking more about the plot is going to take us straight into spoiler territory, so we’ll leave well alone and let you discover the magic of this adventure for yourself.

Suffice to say, fans of the fey and enchanting stories will not be disappointed, and there are several nods to Alice in Wonderland and other such popular tales in the book.

This is the sort of adventure we’d love to play through (and we will once we wrap up our Icewind Dale: Rime of the Frostmaiden campaign), and we’re especially sold on the fact that you can play through the entire thing without blood being spilled or initiative ever being rolled. We’re currently waiting for publishing guidelines for this storyline to be released as well, and you can bet your last gold piece we’ll be writing some feywild adventures for DMsGuild when that happens.

We’ve talked a fair bit about the adventure, but the core of this column is optimization, so let’s get down to the crunch. Witchlight introduces two brand new races – the Fairy and Harengon, which are also (guess what?) fully legal for D&D Adventurers League under the latest rules.

We’re not entirely sold on the fairy (though built-in flight and some innate magic might appeal to some players), but we’re pretty excited about the harengon.

Adding your proficiency bonus to Initiative is huge, and getting both an inbuilt movement skill and a conditional reaction filler, as well as proficiency in Perception makes them ideal adventurers.

This also drops at a time when rabbit people have been thrust back into the spotlight thanks to FFXIV Endwalker’s male Viera reveal, and this is all sorts of perfect because there’s no better way to build a character inspired by our new favorite MMORPG than now (yes, our relationship with World of Warcraft ended).

And just for the fun of it (and also because we can) we’ll make it a Reaper to boot.

Without further ado, let’s hop to brewing up our very own scythe-toting Vorpal Bunny boy of destiny!

First off, let’s take a quick look at what makes a Reaper. According to FFXIV lore, Reapers wield the power of verboten, fueled by the souls of the slain. These then materialize to create a variety of effects, including summoning a wraith-like avatar in JoJo’s Stand-esque fashion.

This sounds a whole lot like a Warlock, and the almighty Hexblade (published in Xanathar’s Guide) is a great fit.

Going Pact of the Blade at 3rd level lets you conjure a massive scythe (let’s call this a reflavored two-handed slashing weapon like the halberd or even a funky greatsword) and to use your Charisma bonus as your attribute of choice when making weapon attacks, and five levels means you get Thirsting Blade and Eldritch Smite invocations for an extra attack and damage dice in on hit.

Picking up some Sorcerer levels later on (and the Shadow Magic origin) also gets you Hound of Ill Omen, a feature you can reflavor as the Reaper’s avatar. You can also pick up the alternate class feature from Tasha’s Cauldron that lets you burn Sorcery Points for advantage on an ability check, and use that to send your already boosted Initiative through the roof. Quicken Spell and Subtle Spell are Metamagic auto-includes, which leaves you a third flavor choice.

Depending on how often you want to respec your character (and in Adventurers League’s latest rules, you can do so each time you gain a level), you may want to try working in 2 Paladin levels (requires an investment of 13 Strength) for Divine Smite.

If you were so inclined (and didn’t mind losing some spell access on the Sorcerer side of things or an ASI/feat slot), you could even aim to take 2 levels of Fighter for the Action Surge.

The end goal should look something like Paladin 2/Shadow Sorcerer 13/Warlock 5.

With 27-point buy (the default for Adventurers League), you’re in a pretty good position to start with a 16 base in at least two of your ability scores. One of these scores is going to be Charisma, and the other is Dexterity for sure.

As you level up, you’ll want to max out your Charisma to 20 since that’s your primary ability score. In place of a regular +2 bump to an ability score, also consider feats that add +1 and grant you additional spells or abilities (like Fey Touched from Tasha’s). If you have spare ASIs, consider beefing up your Dexterity or taking the Resilient (Dexterity) feat.

Some players may scoff at the lack of Polearm Master and Great Weapon Master in this build, but I would argue that they are by no means necessary when you’re using magic to supplement your damage and you don’t have all that many ASIs to spare.

Skills, Spells and Other Considerations

The Reaper’s job actions in FFXIV don’t exactly translate well to D&D, where there’s an added dimension of character Skills and access to magic. For skills, pick what feels thematically appropriate to you. We typically load up on Dexterity and Charisma based skills like Acrobatics, Deception and Persuasion, and you want at least some semblance of Perception in the mix (which you get as a harengon). Proficiency in thieves’ tools is also a huge plus.

For magic, picking a mix of damage and utility will go a long way. If you’re following our roadmap, you’ll get access to minimally 3rd level spells and spirit shroud from Tasha’s, which manifests spirits of the dead to add extra damage to your weapon attacks, as well as to debuff nearby foes. This is your Reaper flavor right here, and the damage scaling for using a 5th level slot makes it comparable to holy weapon, but better.

Pick cantrips like booming blade and green-flame blade because you can use Quicken Spell with those and work them into your damage rotation as a bonus action filler (kinda like a combo finisher in FFXIV). You can trigger Divine Smite and Eldritch Smite off such hits too, so that means big bursts when you really need them.

Finally, you want counterspell and dispel magic (your interrupts), Misty Step as your gap closer, some adventuring utility like mirror image, fly and see invisibility, and some damage spells of your choice to clean out the riffraff (synaptic static is pretty good, and mental prison can wreak havoc in single target fights). I’m a big fan of picking reverse gravity or whirlwind as that one 7th level spell, but you’re always welcome to consider other options.

In Tier 1, you’re best served with a mix of Warlock and Sorcerer levels, and playing it safe with Eldritch Blast spam in the back line. Starting Sorcerer (for Constitution as one of your save proficiencies) makes a really big difference in the long term, and you’ll be building towards Sorcerer 1/Warlock 3 by the time you play three games and move on into Tier 2.

When you hit Level 5, respec into Warlock 5, bumping your Charisma to 18, and picking up the Eldritch Invocations you need to start swinging that scythe. Take 3 Sorcerer levels and 2 Paladin levels next, and you’ll grow quickly into your own and become a solid threat with all the Divine Smites you’ll be throwing. By the end of Tier 2, you should be Paladin 2/Sorcerer 3/Warlock 5.

At Level 11+, when you first step into Tier 3, pick up your 4th Sorcerer level and ASI to cap your Charisma at 20. Take additional sorcerer levels as you progress, working in your choice of Feats as necessary with respecs whenever you level up.

In the early game, you’ll be relying a lot on your natural Dexterity and the mage armor spell to get by.

By Tier 2, you should be able to pick up a reliable+1 halberd that you can make your pact weapon, and things can only get better from there. At higher tiers, you’ll want a Tome of Leadership and Influence to get your Charisma to 22 and a Manual of Quickness of Action to improve your Dexterity. Consider utility items that give you more movement and getaway options (which don’t require attunement), and your best-in-slot armor’s the Robe of the Archmagi, which you can probably acquire in late Tier 3 or early Tier 4.

While the Reaper uses a scythe in FFXIV, you don’t have to lock yourself to one in D&D. Don’t be afraid to reflavor any magical two-handed slashing weapon you get your hands on into something vaguely scythe-shaped. If you manage to acquire Blackrazor or a Holy Avenger greatsword for example, there’s no reason for you not to use it!

While we’ve been limiting ourselves to replicating the flavor of FFXIV’s Viera race and Reaper combat job, harengons are generally great melee skirmishers. In fact, it wouldn’t be surprising to see a harengon ranger in play, perhaps one using the Drakewarden subclass from Fizban’s Treasury of Dragons that just previewed at D&D Celebration 2021.

There’s also a sneak peek of the Metallic Dragonborn from the same book tucked away in the map interface, and we think they’ll make great Au’Ra if we ever get down to doing another article about optimization and crossovers! Also, have we mentioned that these previews are entirely #AL_legal? It’s time to get to building!

If you ever decide to use our optimization tips to put a Viera Reaper together for your home game (or to simulate one in AL), be sure to let us know how you do. We’re excited to hear about your exploits and your stories!

If you want to pick our brains about your own character, or if there’s a particular concept you’d like to see replicated for D&D, drop us a note too, and we’ll see if we can work some optimization magic!

Support Us on Ko-fi

With the event industry in a rut due to Covid-19, we have pivoted back to creating geeky content and offering D&D experiences both on- and offline (while adhering to all prevailing safety guidelines). If you would like to support our geeky endeavours through Ko-fi, you can do so at https://ko-fi.com/neotokyoproject.