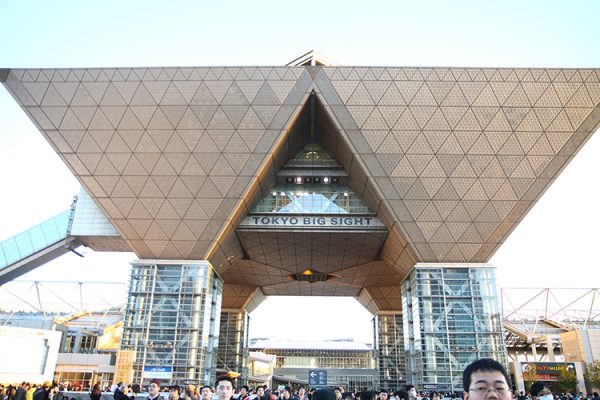 Comiket (コミケ) is “Comic” + “Market”, but having experienced a few, we felt that it definitely extends to more than that. Thinking about comics and doujinshi is just the surface, and so Haruta and I decided to plunge deeper. This is what this year’s coverage is mostly going to be about.

Firstly, let’s get the usual things out of the way. This year’s doujinshi had the usual top runners still on top: Kancolle (艦これ), Touhou Project (東方), Touken Ranbu (刀剣乱舞), iM@S, and Fate/Anything (and its spinoffs like Prisma Illya). Corporate booths had a really long queue for Gochiusa (ごちうさ), and the Grandblue Fantasy (グラブル) dakimakura (released ONLY on D2) sold out really fast. Nekopara was also present, and had cosplayers for each of the characters. Kaitou Tenshi Twin Angel (快盗天使ツインエンジェル) was promoting its next season. It’s been a long time! 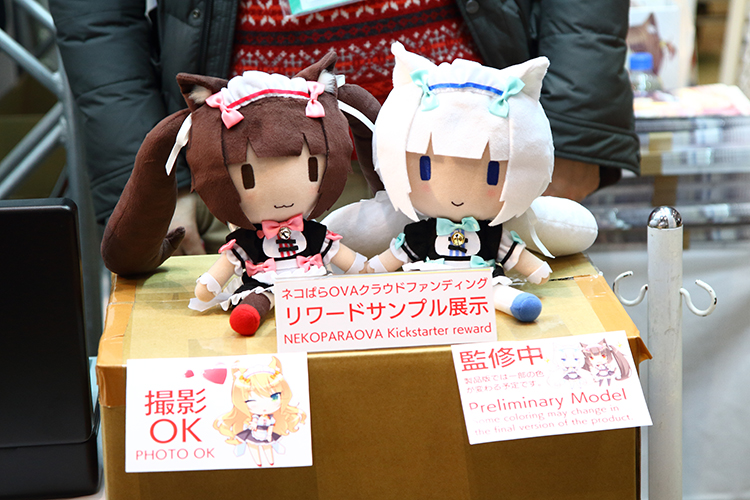 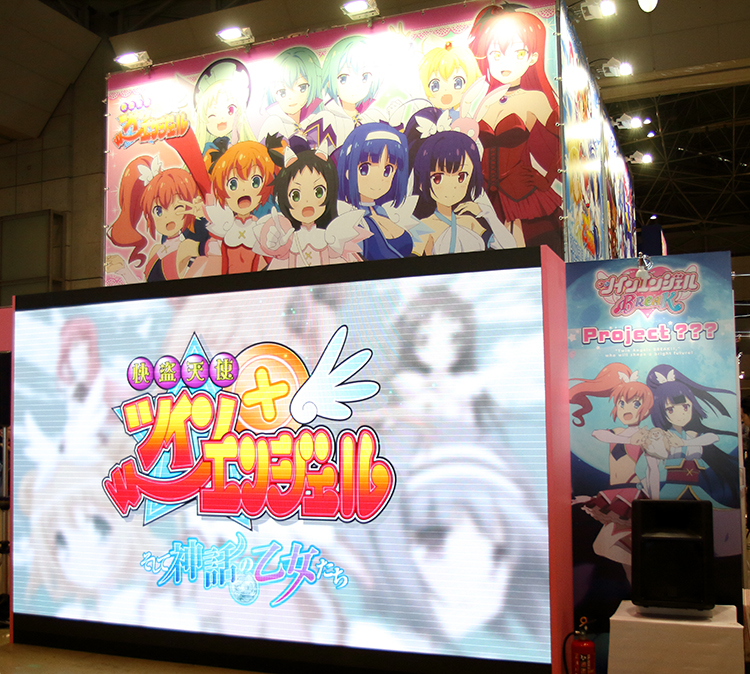 Making a comeback after 6 years is Kaitou Tenshi Twin Angel!

Secondly, if you didn’t already know, Tokyo Big Sight has now expanded by putting up another “double” hall. This year had 東7 (booths) and 東8 (changing room). To take advantage of the new space, both the doujin booths and corporate booths have expanded. 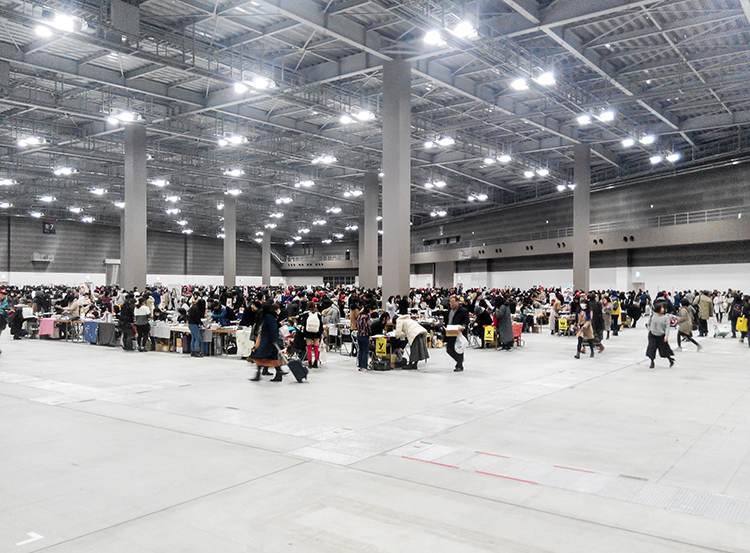 Comiket is just going to keep get bigger and better…

The new hall is still plenty spacious, which means that there’s still room to grow. Needless to say, Comiket is still war. Number of counted visitors this time was 550,000! (Not counting those not in the main queue after noon or so.)  And the booth count was 35,700! The most ever!

Now, something interesting before we carry on. Before the shutters were lifted to start the day, on D3, I had the chance to personally witness one of the doujin booths having 2 of their doujinshi barred from sale because it was just too NSFW. Think about that for a moment. (You may need to have seen some R18 doujinshi to understand what I’m talking about here.) And the reaction around me as the news spread was like “え？”, “まじ？”, “もう？”, and “www”, or a mixture.

This is the place for non-doujinshi stuff, and there are a great many things to keep your head turning. Last year I wrote about homemade headphones, this year I’m going to show you glass pens. 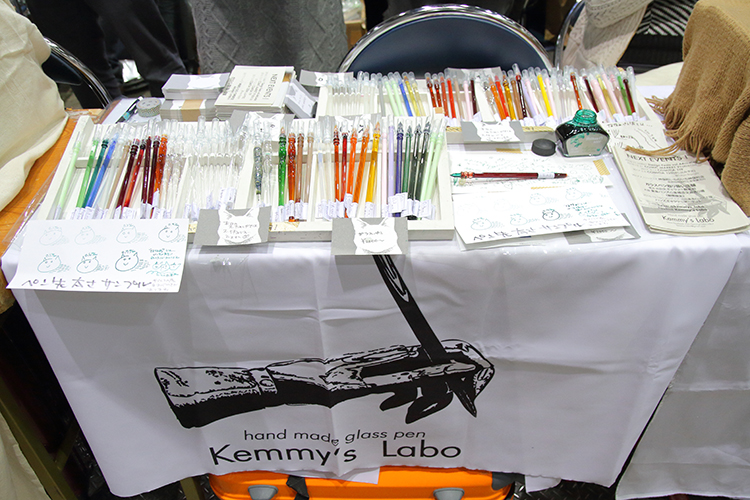 Completely made of transparent glass, with various nip sizes to your liking. By Kemmy’s Labo

These behave like quills where you dip them into ink, and the surface tension holds the ink on the nip while accumulating just enough at the tip for you to write! I saw people trying it out and I’m impressed at how consistent the thickness of each stroke is.

Well, there’s not just glass pens, miniature models for your Nendoroids and other similar-sized figurines as well! Check these out! Beautifully crafted; each and every single miniature! 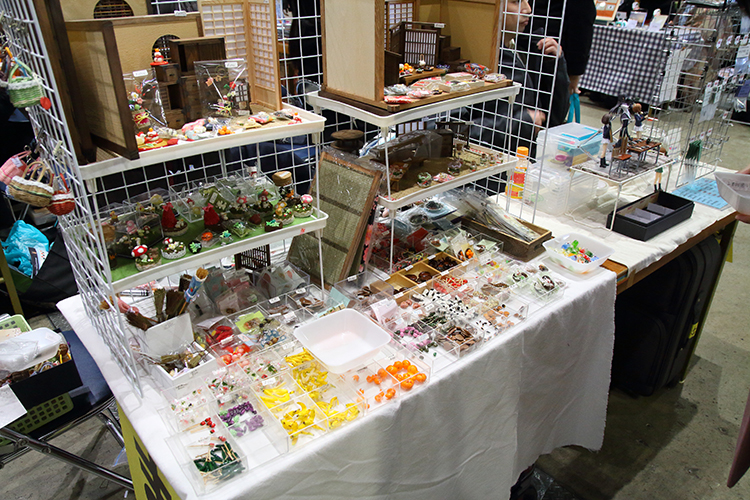 Perfect for Nendoroids. Check out close-ups on her Twitter!

Music lovers are not left out either. This is also the place for you to get your indie music, including niche and very niche genres like 電波ソング／萌えソング, みみかき. DJ mixes are also in. Check out this booth which caries both 電波 and Camelia’s creations! I personally love songs which are かめりあ feat. ななひら. (Camelia does 電波 as well, so he actually has works in both booths!) 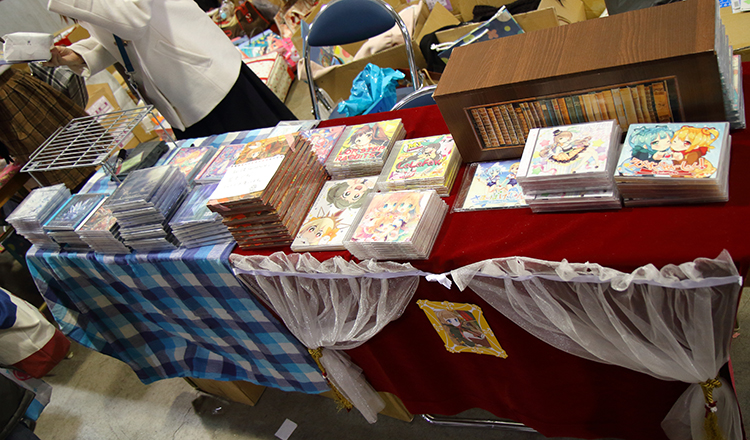 Camelia (かめるかめりあ) [left] & Confetto [right] booths, which had pretty long queues at the start of the day!

D3 at 西１ will never be boring, and I’m sure there will be loads more that I can feature each year. But let’s move on a little.

Comiket is getting more and more international every year, as they reach out to other countries with blooming culture and other countries reach in to Japan. The Comiket Official Page on Facebook said that they had probably just gotten the most number of international visitors yet. And this year, as part of their International Otaku Zone, they featured Singapore. 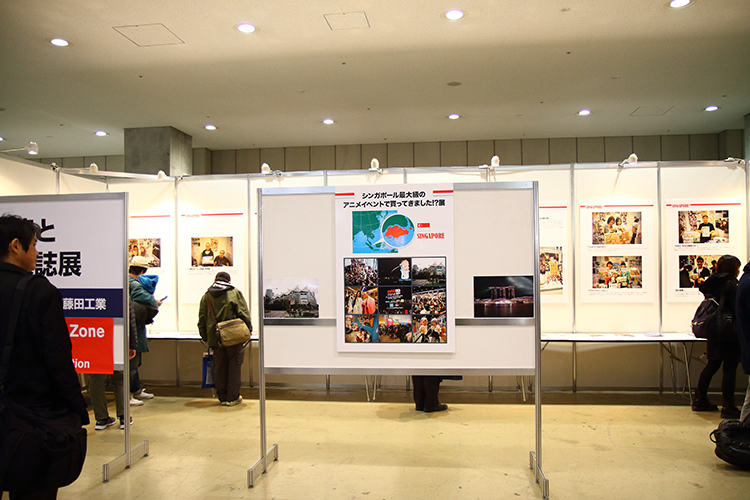 Pictures and short paragraphs describing what otaku conventions in Singapore are like.

The Japanese have probably heard some stuff about Singapore, most likely something to do with that lion with a fish tail (and you can juuust see it in that picture in the middle), but having a zone like that at Comiket is something I’d say I’m somewhat proud to see happening.

Let me now take you outside. To the cosplay areas! 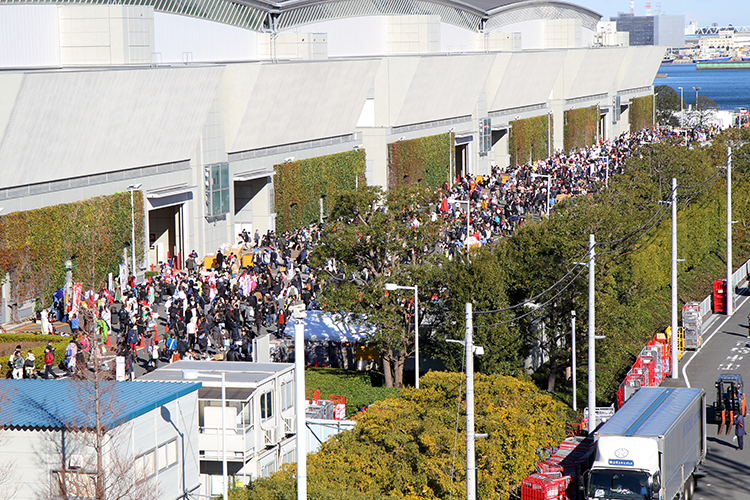 You can find cosplayers just about anywhere outdoors, even mixing with the queues for the booths as seen here!

Comiket is never complete without talking about the cosplay. From swimsuits to armour (the proportion of which swings depending on the temperature), there is a really great number of cosplayers that it makes perfect sense to chillout after hitting your popular booths (most are sold out around noon to 1pm anyway) and have a really long look around. You’ll also see endless blogs, tweets, and posts online of all the different cosplays each time Comiket comes around.

This time, we took a plunge deeper as well, and Haruta interviewed two of these cosplayers. First up, we have Shimizu Taichi (清水 泰地). 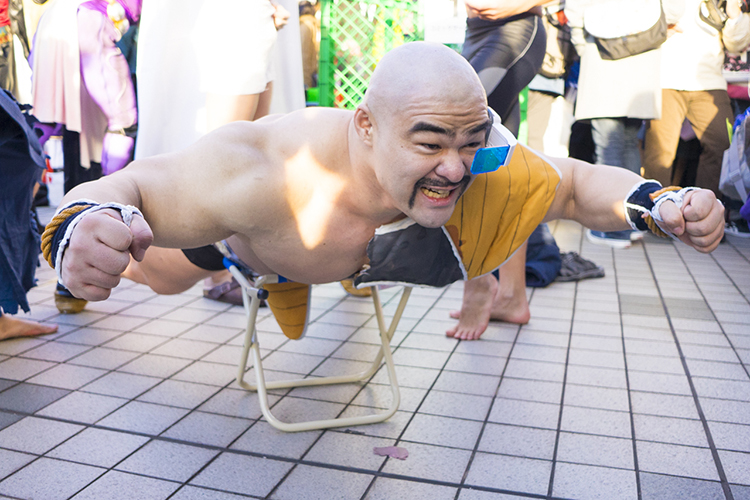 Feast your eyes on those muscles! Get more on his Twitter!

A professional body builder who’s put his muscular body to good use for his hobby, Shimizu has always loved anime and manga since young. One day it suddenly occurred to him that his body figure is similar to some of the anime and manga characters. So he decided, why not cosplay these characters? Thus he debut during Summer Comiket 2015 as the green superhero Hulk from Marvel Comics.

Since then, Shimizu has cosplayed several other characters, such as Alexander the Great from Fate/Zero, Broly from Dragon Ball Z, and his most famous, Zangief from Street Fighters. When asked what his next cosplay plan is, Shimizu said he hadn’t thought about it yet, but he’s most likely bringing it out during Summer Comiket 2017! With that, Haruta left him to put on a coat (remember it’s winter!) as he takes a break from posing as Nappa from DBZ.

Next, we have a newbie to the Comiket scene, Kuro, as he cosplays Ezio Auditore da Firenze, from Assassin’s Creed II! 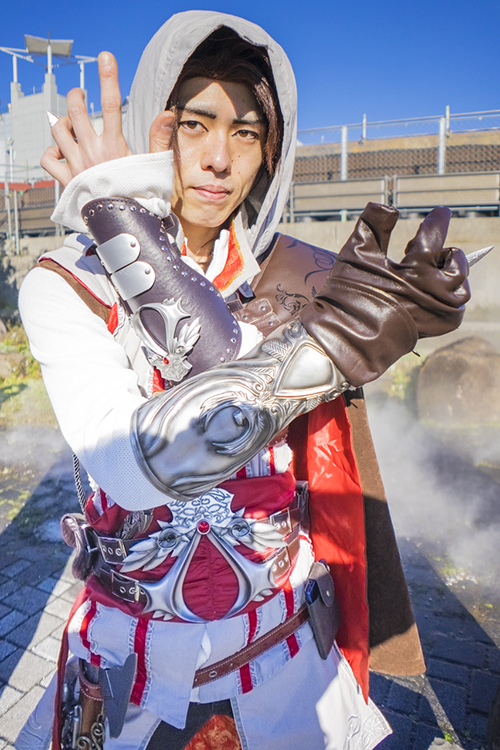 Although being his first time debuting at Comiket, Kuro is no stranger to cosplay, having dabbed in the hobby for around one and a half years. His first cosplay was Kotetsu, from Tiger & Bunny, in his casual everyday wear.

When asked for his reasons for starting cosplay, Kuro said that he went to a party with his upperclassmen, where everyone is a cosplayer. Due to the influence, he decided maybe he should give it a go, and since then he hasn’t stopped yet.

Kuro also has a passion for swords, and thus likes cosplaying characters carrying a katana. Kuro has cosplayed several Hakuoki characters as such, and more recently, Mikazuki Munechika from Touken Ranbu. Kuro plans to challenge a different type of characters by cosplaying someone from Idolish 7, though which one specifically, he hasn’t decided yet. When asked how long does he see himself continuing the hobby, Kuro said the future is still uncertain now, so for the time being he’s going to try for another two to three years, then take a look again from there on.

Every cosplayer has a story, and realising that (while looking at the numbers), you can start to see why this post is a deeper dive. But of course, we can’t carry that many stories (nor pictures) in one post, so head on over to our Facebook page for a larger album of cosplayers!

Comiket is much more than just comics and commercial booth merchandise (limited edition or not!). I’d like to reiterate what I’ve said before, and this is the view of the organising committee: Everybody at Comiket is a participant. There are no sellers, no buyers.

You see, Comiket is made of its people. Coming together, sharing such a huge passion for whatever they have (really whatever as you would have noticed by now), every single person there adds to how awesome this event is, and everyone is there to enjoy themselves. Even the rush for limited edition stuff are all done very nicely, very “politely” if I may say. And let us not forget the volunteers who work tirelessly for 3 days straight to guide the crowds. Their crowd control and systems they put in place are absolutely amazing (this one you can only understand once you personally see it).

Attending Comiket is kinda magical, and always leaves me with a sense of awe, sense of exhilaration, and a sense of fulfilment in the end. I’m sure everyone feels this magic too. Which is why, never failing, there will always be this at the end of the 3 days: 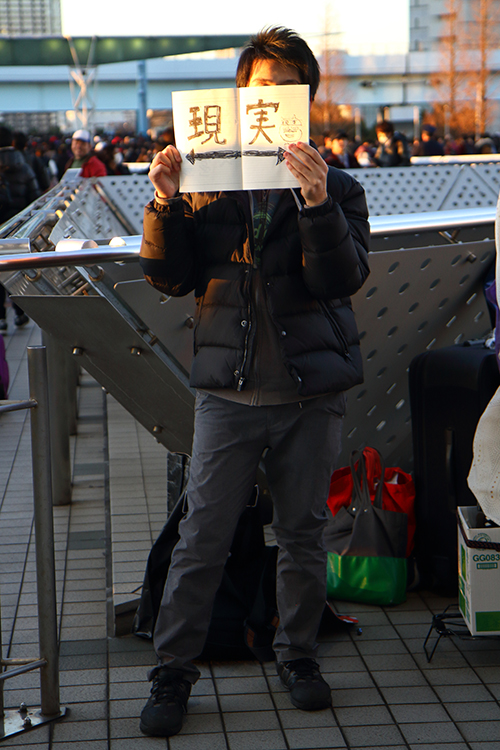