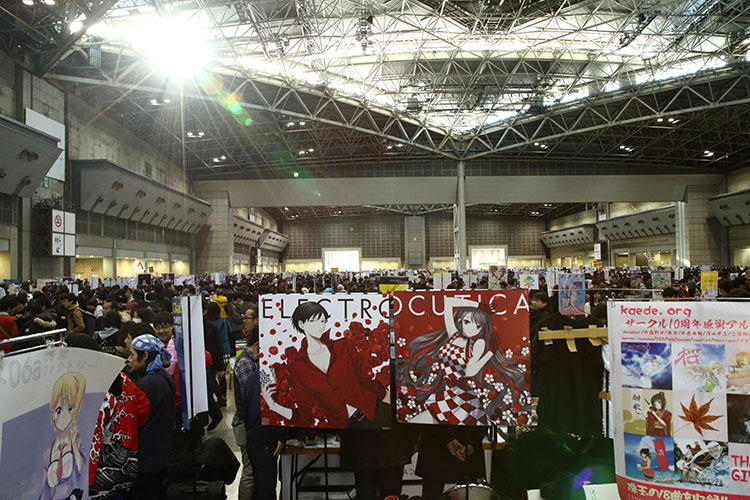 Anyway, a round up on circles this year: Type Moon (Fate basically, which includes FGO) continued to grow at a stunning pace and kept the top place by a large margin! THE iDOLM@STER (アイマス) also grew at an amazing pace to claim second spot, overtaking Kancolle (艦これ) which shrank a little instead and took third. Touhou (東方) is shrinking slowly along with Touken Ranbu (刀剣乱舞), but both maintaining their positions in fourth and fifth respectively since the rest of the genres below them are also shrinking. Azur Lane (アズールレーン) which I mentioned would be entering the rankings this year, has debuted (on the rankings) at 10th place.

Speaking of Azur Lane, they’re really pushing very hard. Over the last year I’ve been seeing their ads in many places on the JR lines and even video ads in the new E235 EMU trains. They didn’t have an official booth the last year in Winter Comiket, but this time Yostar came with a big one: 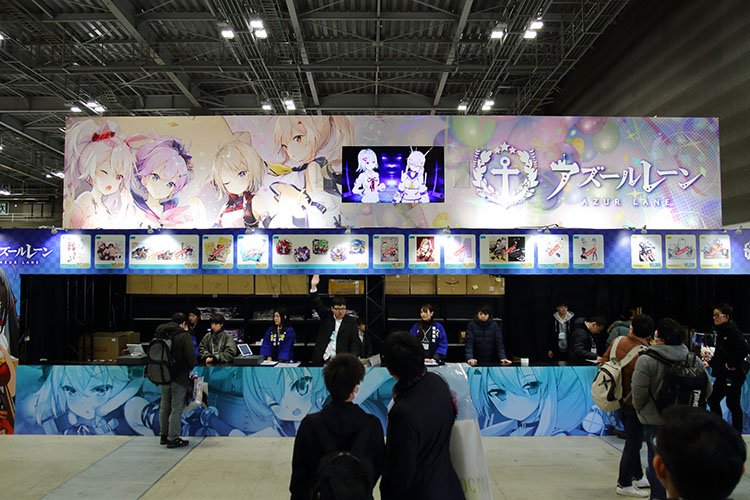 Yomemi is interviewing Ayanami (on screen) at the Azur Lane Corporate Booth.

There’s even a virtual interview going on for you to be entertained while queuing! Yomemi’s “high tension” (テンション高い) personality was uplifting and likeable (although my friend wasn’t too fond of it), contrasting with Ayanami’s dandere character.

Ichijinsha (一迅社) had quite an interesting facade for their booth this year, making it look like a visit to a shrine. Could be said as Ichijinja (一神社) ww. Nekopara (ネコぱら) came back yet again for the 3rd year running, along with Tokyo 7th Sisters (looks like these two are regulars now), but a dedicated Nanoha (なのは) booth was nowhere to be found! As far as I can recall Nanoha had a corporate booth very regularly at Comiket. A little strange… let’s see whether they return this coming Winter Comiket. 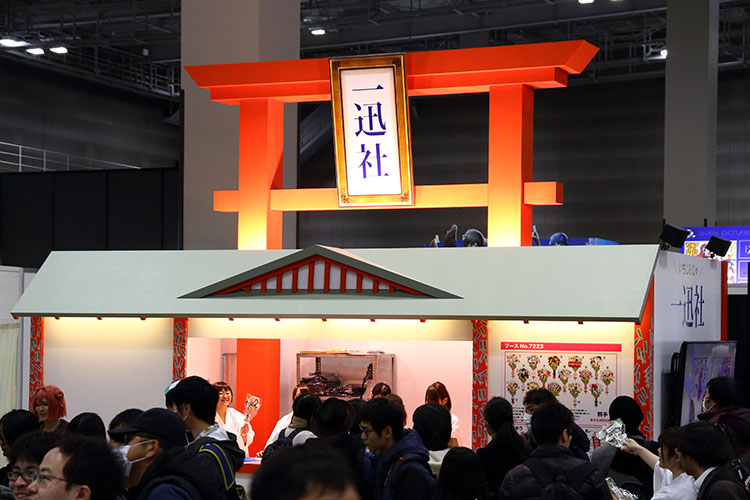 Remember to ring the bell, bow twice, clap twice, and bow once again as you state your order to the lady at the counter at Ichijinsha/ja!

Another “corporate booth” (though not really) is the IOEA’s (International Otaku Expo Association) which our Doujima event is a member of. The IOEA is here to link up all otaku events around the world so please come on by the booth wherever and whenever you see one to check out similar events from all around the world! 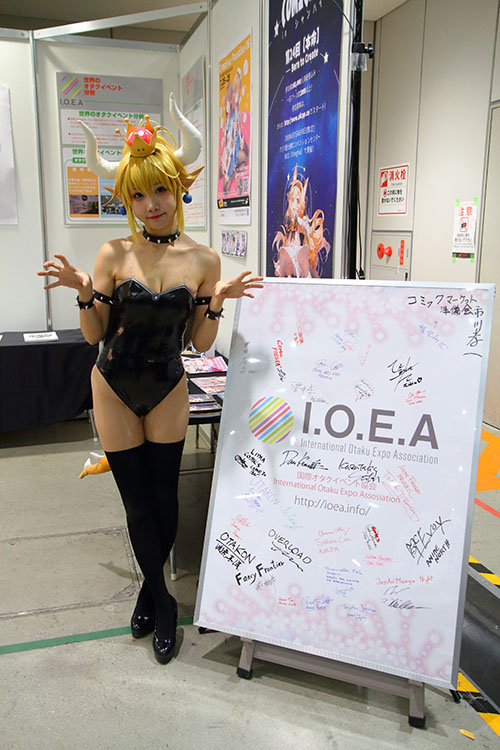 They had a cosplayer cosplaying as Kuppa Hime (or Bowsette) to promote this booth! 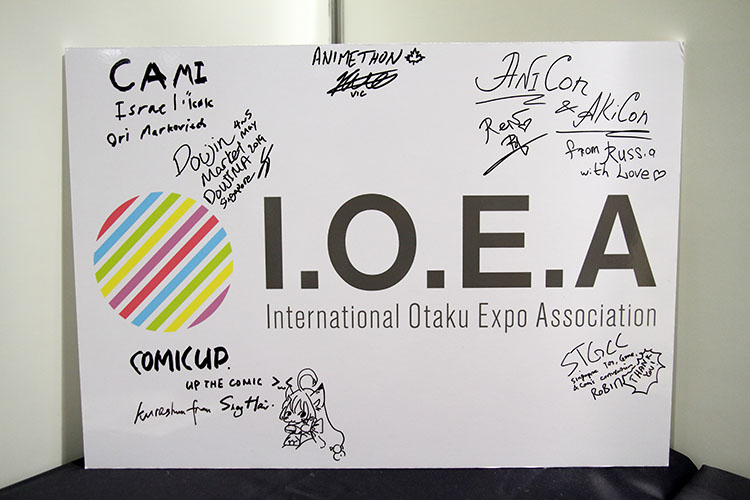 We of course signed our event on this board too!

Now… you might be wondering what the title of this post was talking about. Comiket accepts applications for a circle booth from basically anyone and everyone, so it’s certainly not unthinkable, but it was still surprising to have Angela join Day 2 of C95 as a doujin booth! Angela is a very popular professional artist duo who have sung well known songs from Soukyuu no Fafna (蒼穹のファフナー) (Fafner in the Azure) and Shidonia no Kishi (シドニアの騎士) (Knights of Sidonia). They are also well known for their fun personality! What they had brought was something really unusual: A CD compilation of their 100 best MCs and an anthology of Angela related material (manga, illustrations, etc). To have them at Comiket in person manning their own booth and distributing their own unique material is really amazing and a treat to all! They even took care to bring enough that despite the long lines and hours of queuing, they only sold out near the close of the day. That meant that everyone who was in queue managed to get a copy! 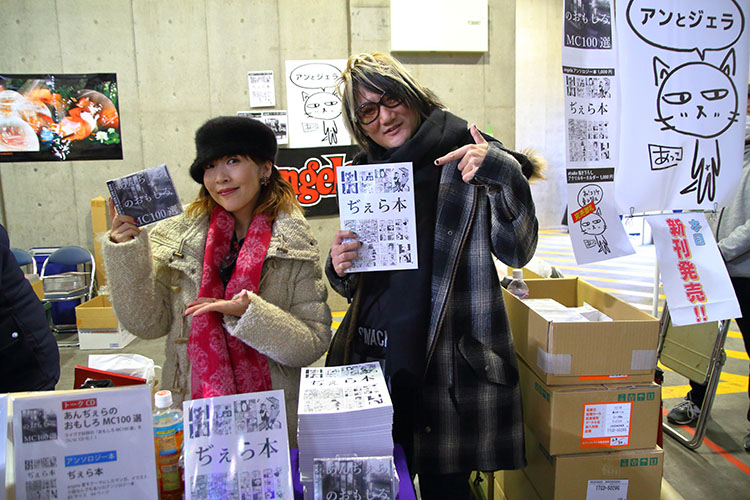 On to the more usual unusual stuff this year! It’s electronics related this time! Check it out: 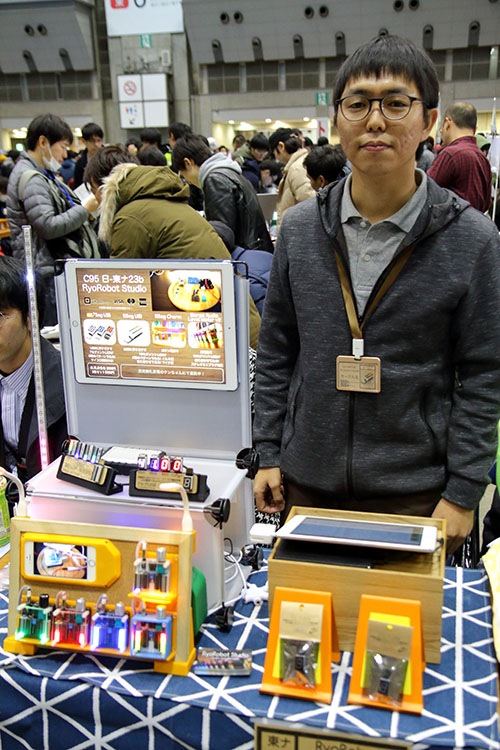 RyoRobot Studio crafts electronics for making your daily life more vibrant (that’s their motto). What’s showcased here are audio level meters (stereo too!) which jump like the EQ fancy graphics you might see on a digital player, except that these are made from segmented lights rather than display panels. The dancing lights from this booth certainly caught my attention immediately when I came to the section! There are also colourful 7 segment displays powered by USB. Nifty stuff indeed! Head over to his website to see some really nice pictures! (Though be aware it’s all in Japanese)

On to some cosplay! Still relatively fresh, from the Summer season, is Hataraku Saibou! (はたらく細胞！) (Cells at Work!) with cute depiction of cells as humans fulfilling their special roles in the human body, and even fresher, from the Autumn season, is SSSS.Gridman, whose most popular character is undoubtedly Takarada Rikka (宝多六花). 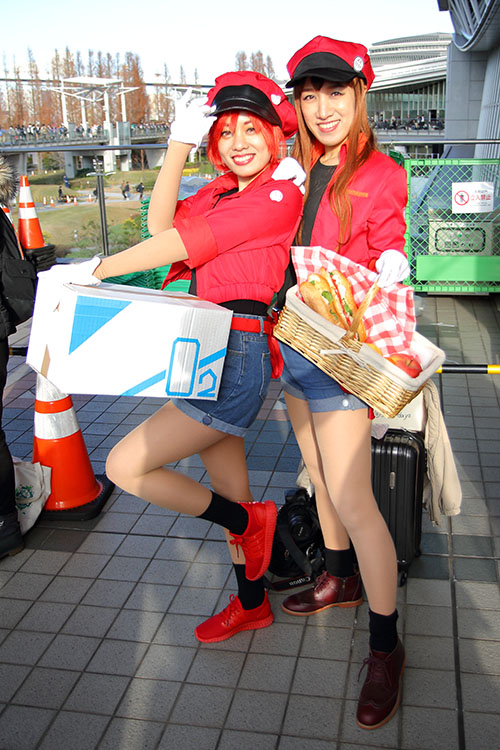 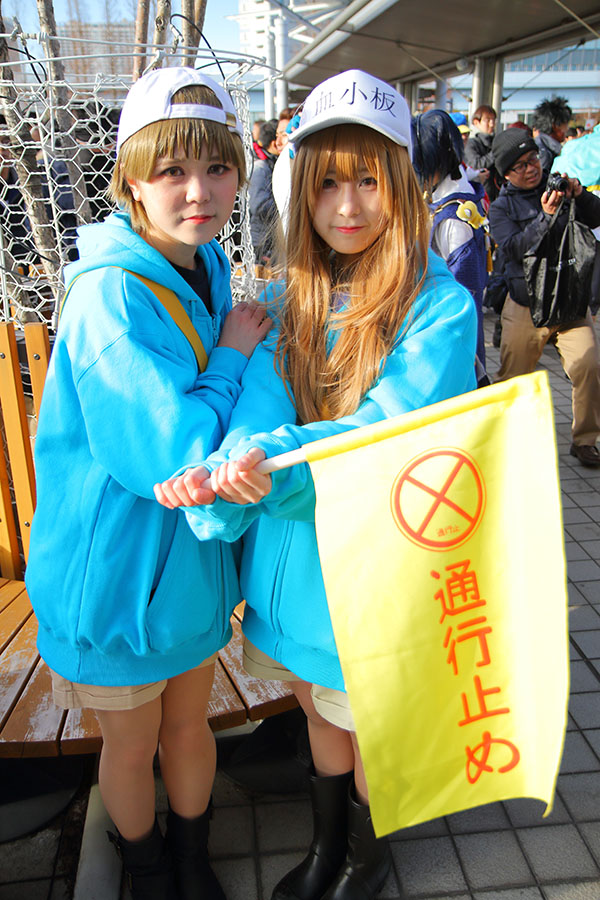 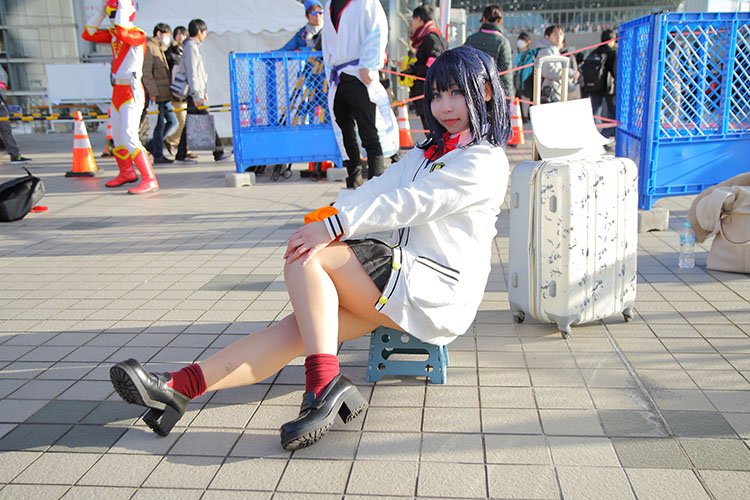 And so another Winter Comiket ends. With this one being the one to mark the end of the Heisei Era as well. If you didn’t know about this, it’s actually quite significant, since the Japanese hold their emperor in very high regard. Many of the doujin circles came together to create an anthology just to mark this occasion. I’ll say it in each post, Comiket has a community spirit. It’s the gathering of everyone with a huge passion in their hobbies. No buyers and sellers, only participants and volunteers, and everyone contributes to it in one way or another. This is what will continue to always make Comiket magical.

For me, in the morning raids, my team this year was very on top of things such that we had alot covered. Over the years, we’ve definitely built up strategical and tactical mastery, and I hope to enjoy the next raid even more than this one. The afternoon was relaxed as usual, moving around to browse, helping others pick up things, and just enjoying discovering new works/circles, as well as appreciating the cosplays. Not to mention that because of the ongoing improvement of Big Sight, Comiket each year is slightly different in terms of arrangement, so it’s nice to observe how the dynamics change. This year (2019), the game changes in a major way, and I’m certainly looking forward to rethink our strategies and tactics, as well as to observe its effects. Unfortunately though, I had to rush off a bit early on the last day and so once again I missed the 現実 (reality) sign. Sigh… Hopefully next (this) year! 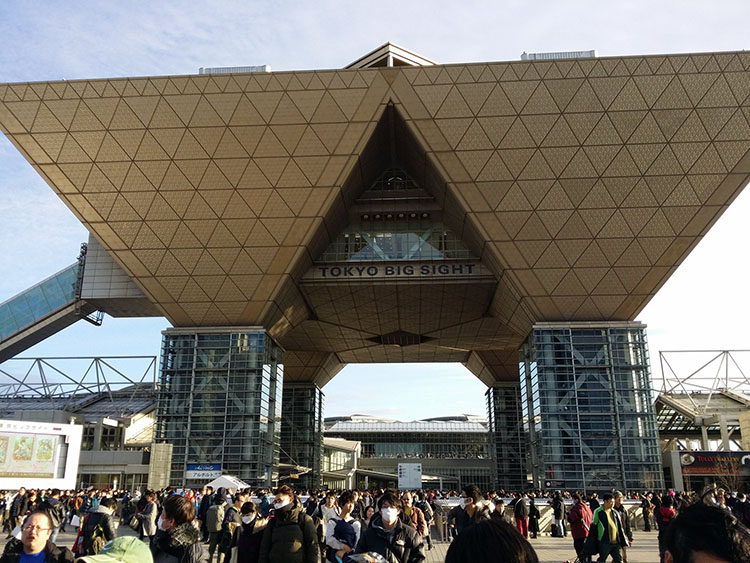 The Last Comiket of the Heisei Era