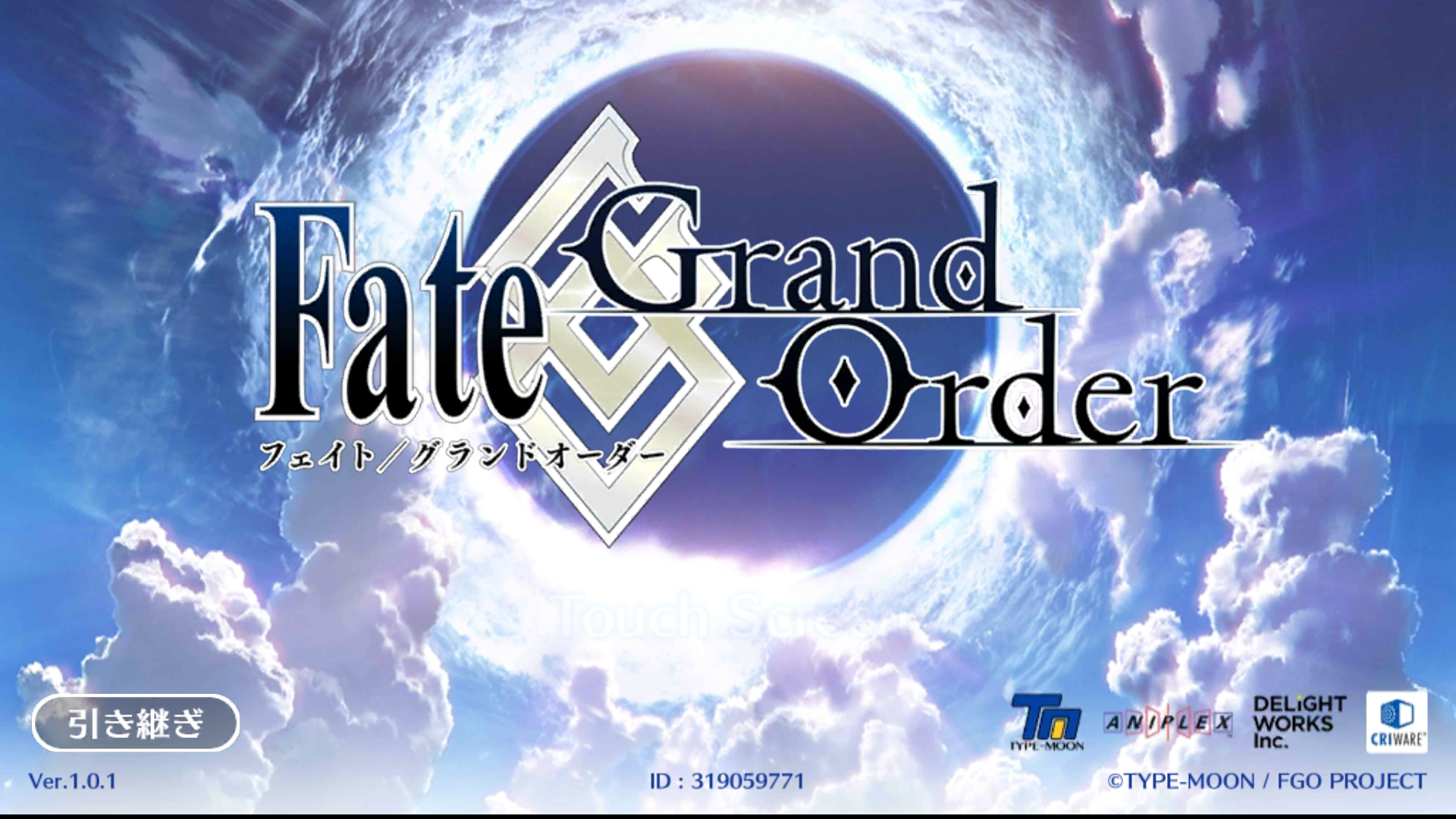 I don’t usually play mobile phone games, but for Fate/Grand Order (mostly because the Fate series is my one weeb indulgence), I decided to make an exception.

Grand Order is the latest in Type Moon’s long running Fate franchise. For those of you who have not been exposed to the awesomeness that is Fate, well, think of it as a history lesson for otakus on crack, with a heavy dose of the supernatural thrown in.

In the setting, magicians vie for supremacy in Holy Grail Wars, with the ‘heroic spirits’ of famous persons from the past as their battle companions. These spirits are categorized loosely into RPG style archetypes like Archer, Assassin, Berserker, Caster, Lancer, Rider and Saber, and possess both mysterious powers and arcane relics (called Noble Phantasms) inspired by their real-world legends.

I could go on and on about the setting and all, but it’s really easier to just scoot over to the Type Moon Wiki for a quick look. 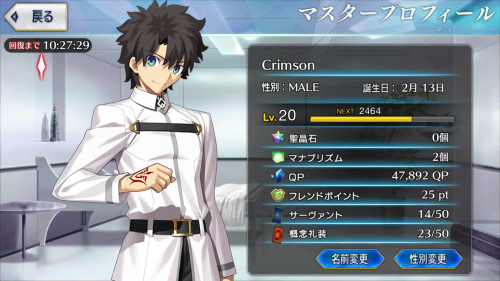 Now, on to the review.

Fate/Grand Order puts you in the role of a fresh recruit in Chaldea, an organization that oversees human history (it’s kinda like S.H.I.E.L.D., but with magic users).

Naturally, being the typical spiky-haired anime-style protagonist that you are, you quickly get embroiled in all sorts of trouble, and have to plunge through time to save the world.

Of course, as in all things Fate, the Master (that’s you) isn’t capable of going it alone since you know, people tend to die when they’re killed. That’s why you’re relegated to more of a support role, slinging heals and buffs while your Servants handle the heavy lifting.

Gameplay switches between a simple map-based navigation, VN style narration, and fights with some repetitive mooks and the occasional stage boss. 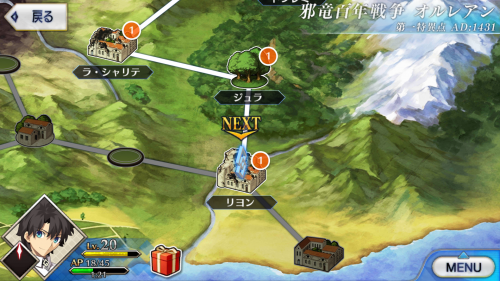 The navigation’s pretty straightforward. I mean, you can’t get more obvious than that. 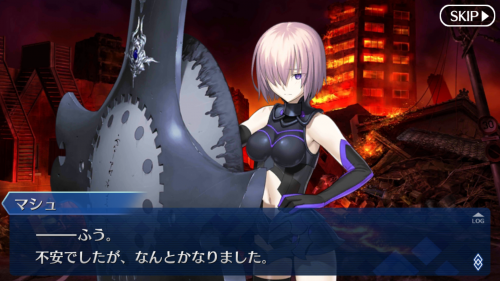 The story reads like a visual novel. Also, who woulda thunk your kouhai would be part-Heroic Spirit?

Attempting stages consumes AP (like any other mobile game), and naturally, you have to conquer stages to progress in the story.

Combat is simple and essentially a spin on the Rock, Paper, Scissors (and in this case also Lizard and Spock) system, coupled with match-3 elements. 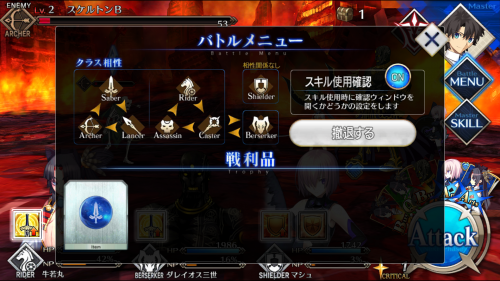 Check out how Servant classes interact by clicking on Menu. You can also select Menu if you want to Flee the battle.

Each Servant has a predetermined pool of color-coded cards determined by their class, which contain Arts (Blue), Buster (Red) and Quick (Green) moves. 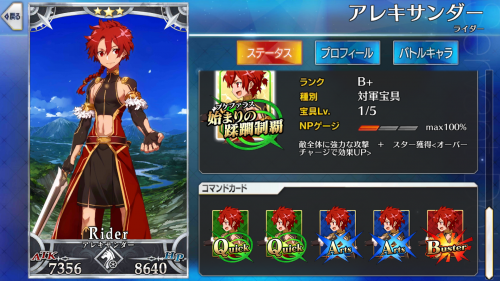 Check out a Servant’s status screen to find out what attacks they possess. Building a team with good synergies can go a long way.

In a nutshell, Arts cards increase the Servant’s NP (Noble Phantasm) gauge, which allows them to pull off their special attacks, Buster cards inflict a large amount of physical damage, and Quick cards add to your Critical chance in the following round, allowing for bigger numbers on a successful hit.

Each round, the game pulls five cards, and after making tactical decisions such as using Servant abilities or Master buffs, you can lock in three of the five cards to form an attack chain. 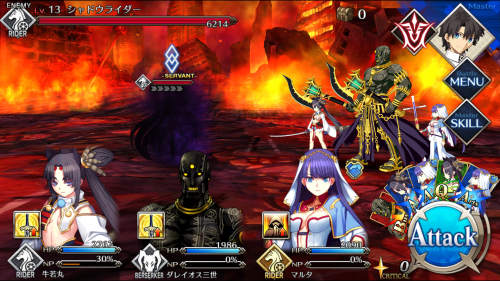 Plan your moves before you hit the Attack button, because there’s no way to go back. Luckily, the cards you’re dealt each turn are displayed prominently.

Chaining the same type of moves can grant a stronger effect (a successful Arts chain fills the NP gauge of all Servants participating in that attack by 20%, for example), while chaining three attacks by the same Servant (by picking 3 similar portraits rather than move types) grants an extra attack. You can combine both move chains and Servant chains for even greater effect, but such occurrences tend to be rare.

Filling up a Servant’s Noble Phantasm gauge lets you use their special attack. These stronger moves also fall under the Arts, Buster, or Quick categories, so chain them strategically to take down difficult enemies.  Each Noble Phantasm activation also comes with animation and cut-ins, so Fate fanboys who’ve always wondered how some of these attacks look like, rejoice. 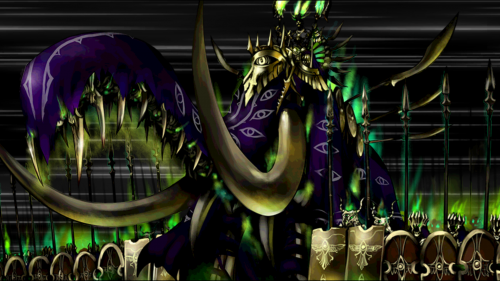 Darius III’s Noble Phantasm – Athanaton Ten Thousand. Who doesn’t want to be trampled by elephanthulhu and hordes of the undead?

There are currently 59 Servants and 36 Mystic Codes (called Craft Essences in the game) to be collected, and rolling for them is done lottery style through the Grand Summon interface.

These Servants include fan favorites like Arturia, Cu Chulainn and Gilgamesh, as well as brand new ones created just for Grand Order. Nasuverse followers will also recognize Mystic Codes such as the Black Keys, the Kaleidoscope and Rin’s pendant in the Craft Essence pool.

You get a free low-tier summon each day, which may result in a 1-star, 2-star (or extremely rarely) 3-star unit or item. You can also make additional low-tier summons with Friend Points acquired from fighting alongsideton your contact list. 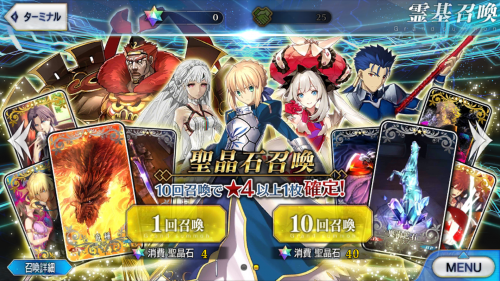 Making ten premium pulls with 40 Saint Quartz has a guaranteed chance for a 4-star unit or item, so spend more in-game currency, why don’t you?

Expending Saint Quartz (acquired through completing objectives and stages or through real money microtransactions), by comparison, guarantees a 3-star or higher unit.

The cost is fairly prohibitive though, and with the very iffy RNG system (I’ve been rolling more Craft Essences than I have Servants), you’re better off saving them till later when the game gets patched and things become a little more stable. 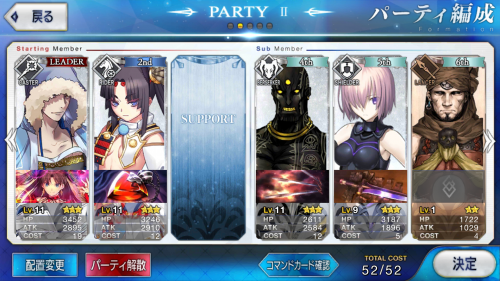 Needless to say, this means that while the game has it going with the story, the biggest woes plaguing it right now are all design related.

Fights tend to be repetitive and lacking in variety, the recharge rate for AP is tediously slow (which reduces replay value), and Servant balance is questionable at best.

For example, I’ve pulled some really abysmal 4-star Servants, while most 5-star ones I’ve seen are insanely overpowered, with ridiculous parameters and abilities. 1-star and 2-star Servants, by comparison, are little better than chump blockers and the same disparity applies to Craft Essences as well. 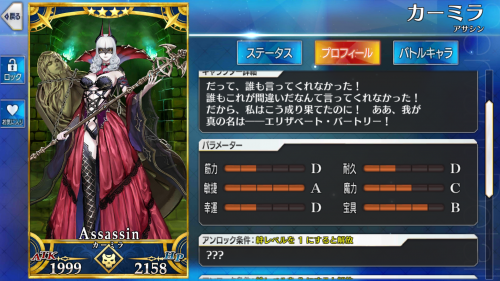 Sure, she can pull off that dress, but seriously, most underwhelming 4-star unit ever.

This, of course, begs the question – could the game have been tested more rigorously before release? It’d have definitely mitigated the slew of QQing the devs are seeing on social media to say the least.

Fixing these problems in the first few weeks will be crucial, since player satisfaction and retention pretty much makes or breaks mobile games.

Still, I wouldn’t be surprised if this title manages to take off once the teething pains are over.

While the system lacks in polish, the game is faithful to, and builds upon, the source material. It documents several Holy Grail Wars that never made it onto the small screen, and that’s sure to whet any fan’s appetite. The art is generally pretty, the animation smooth, and the sheer number of new Servants makes for more story and waifu (or husbando) potential.

Fate/Grand Order is currently gated for Japan (to keep us ignorant gaijin types out), but we all know dedicated fans will find a way. It’s also unlikely that there will ever be an English port, but the game’s intuitive enough that you can manage without knowledge of moon runes.

For more information about the game, check out the Official Site at: http://www.fate-go.jp.