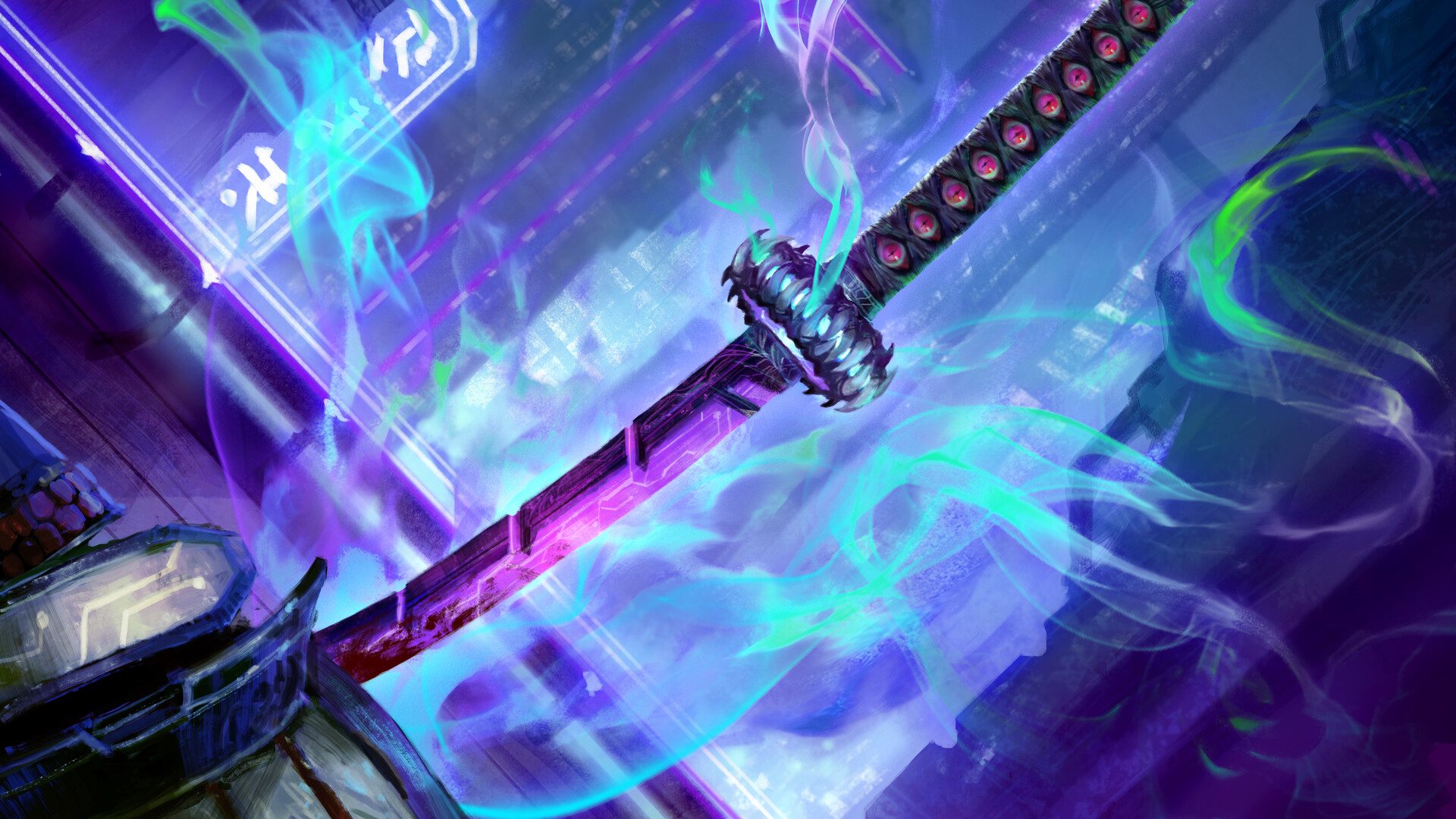 We worked on the Kamigawa: Neon Dynasty inspired Way of the Biting-Palm Monk subclass on Crimson’s birthday stream last weekend, and one of our viewers suggested, rather aptly, that the Biting-Palm Ninja we drew inspiration from could be a Warlock too.

We’ve been mulling over the idea for the past couple days, and here’s what we came up with.

Rather than focusing on the Ninja portion of the card, we decided to try to flesh out the source of these Warlock-y ninjas’ powers. Research into cards from the older Champions of Kamigawa set also revealed some pretty interesting lore tidbits about Takenuma Swamp. 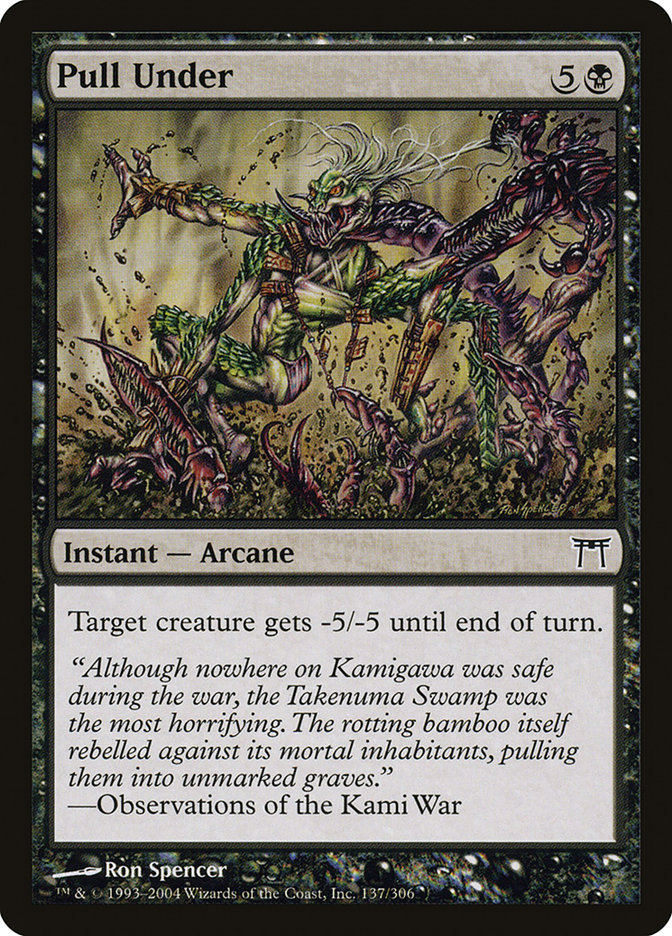 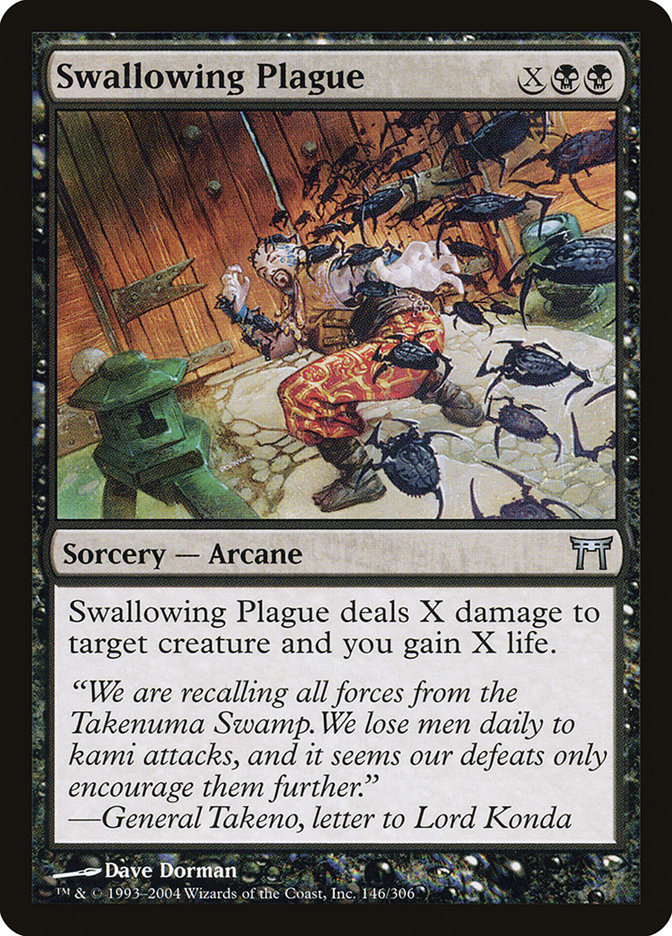 Perhaps the Leech patron is one of the many kami dwelling within this place, and the spells granted by the Leech patron are the ninjutsu techniques that these jushi wielding Black mana practice.

The Leech lets you choose from an expanded list of spells when you learn a warlock spell. The following spells are added to the warlock spell list for you.

You learn the chill touch cantrip. It counts as a warlock cantrip for you, but doesn’t count against your number of cantrips known. When you cast this spell, it manifests as a spectral, fanged maw that gnashes and bites at the target.

You learn dispel magic. It counts as a warlock spell for you, but doesn’t count against the number of spells you know. You can also cast it once without a spell slot, and you regain the ability to do so when you finish a long rest.

Whenever you cast dispel magic and end one or more spell effects on a creature, you have advantage on your saving throws against spells for 1 minute.

You learn grasping vine. It counts as a warlock spell for you, but doesn’t count against the number of spells you know. You can also cast it once without a spell slot, and you regain the ability to do so when you finish a long rest.

Whenever a creature fails its saving throw against your grasping vine spell, it takes an amount of necrotic damage equal to your warlock level in addition to the spells effect.

As an action, you can create a swirling maelstrom of leeches around you that lasts for 1 minute. The leeches fill each space within 15 feet of you, hampering and harming hostile creatures within the area.

A hostile creature’s speed in the area is halved. In addition, if a hostile creature willingly enters the space, or starts its turn there, it takes 4d6 magical piercing damage as the leeches latch onto their flesh.

Once you have used this feature, you can’t do so again until you finish a long rest.

We also brewed up Eater of Virtue on air as a legendary, sentient artifact. Here’s a quick peek at the card, and how we thought we would translate its mechanics into D&D 5E.

There’s not a whole lot of lore on this weapon, so we have had to get creative with our interpretation. Thankfully, cursed katanas are a staple in pop culture, and that means we’ve got plenty of tropes to draw upon.

You gain a +2 bonus to attack and damage rolls made with this magic weapon. It has the following additional properties.

If you are reduced to 0 hp while attuned to Eater of Virtue, it devours your soul. If your soul is devoured, you may only be restored to life by a wish spell.

Eater of Virtue empowers its owner with the skills and memories of its past wielders, allowing you to draw upon their knowledge. Whenever you finish a long rest, choose two skills that you lack proficiency in. You gain proficiency in those skills until you finish your next long rest.

The souls of its erstwhile masters suffuse Eater of Virtue, allowing the blade to manifest a sliver of what they once were. Whenever you finish a long rest, choose one property from the table below. Eater of Virtue has this property until you finish your next long rest.

Eater of Virtue is a sentient, lawful evil weapon aggregating the personalities, grudges and unfulfilled wishes of its former wielders. It has an Intelligence of 15, Wisdom of 12 and Charisma of 19. It has hearing and darkvision out to a range of 120 feet. Eater of Virtue knows any language its wielder knows, and communicates with its wielder telepathically in a discordant tide of voices and machine noise.

Eater of Virtue delights in slaughter, and must be slaked with blood whenever it is unsheathed. If this hunger is not sated, it takes a tithe of blood from its owner instead.

You take 10 necrotic damage, and your hit point maximum is reduced by 10 whenever you finish a short or long rest, unless you used Eater of Virtue to reduce a sentient creature to 0 hit points within the last 24 hours.

And there we have it. Do let us know what you think of this Warlock patron and artifact on our socials (either Facebook or Twitter), or chat with us on Discord! We’d love to have your feedback!

Needless to say, we’re enjoying this set so far. On top of cracking some really fun cards we’ll be using in our Commander brews, we’re also thinking of running a Kamigawa: Neon Dynasty themed D&D adventure now. Maybe we’ll shuffle up some cards, and see how they line up.

(Paws crossed that we get another box to crack for even more cards and more inspiration! WotC senpai notice us pl0x).

In the meantime, if you’re looking to get some Kamigawa: Neon Dynasty packs of your own, they hit the street 18 Feb (that’s this Friday) and should be available at your favorite local game store.

We also hear there’s going to be a VR art exhibition of Kamigawa: Neon Dynasty pieces from Friday onwards, and if that’s your kinda thing, be sure to check it out! The exhibition features 134 illustrations from 83 amazing artists, and runs from 18 to 24 Feb.

We’ll be doing our own little tour of this online exhibition and streaming it next week, so come join us on Twitch next Monday!

Kamigawa: Neon Dynasty releases18th Feb 2022, and will be available at your favorite local game stores.