[D&D, MTG] Kamigawa: Neon Dynasty & The Way of the Biting-Palm

If there’s one thing to be said about Magic: The Gathering’s latest Kamigawa: Neon Dynasty expansion, it’s that it hits all the right notes. It’s distinctly cyberpunk, with a blend of the arcane and technology, and a suitably noir storyline replete with colorful personalities, conniving mechanical villains, ninjas and samurai. I mean, you can’t get more awesome (or more weeb) than that.

The set has also features some really amazing collabs, including with Hara Tetsuo (of Fist of the North Star fame), Yoji Shinkawa (who worked on Metal Gear Solid), and the Vocaloid Hatsune Miku.

Just check this music video out:

There’s even (purportedly) an anime MV in the works:

Naturally, all the card reveals in the lead up to Kamigawa: Neon Dynasty’s street date have us pretty stoked, and we’re already thinking of new ways to tweak our Commander decks, abuse new and returning mechanics, and even play some D&D in this amazing setting. We also opened some cool cards in our Media Drop unboxing on my birthday stream, and we think this expansion is really the best thing ever.

Because we were especially taken by several cards we spotted in the set overall, we figured that we’d give them the 5E treatment. 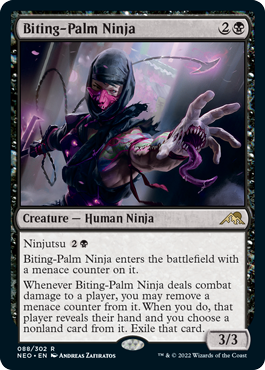 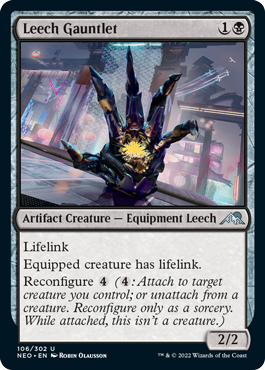 The Biting-Palm Ninja is a new card released in Kamigawa: Neon Dynasty (that we pulled on stream). It’s got the anime vibe (in the Vampire Hunter D or Deidara kinda way) and it’s Ninjutsu ability, Menace counter on ETB (when it Enters The Battlefield), and the perks of removing that Menace counter are all pretty strong. It also practically screams Monk sub-class, which is what we’re going with.

The Leech Gauntlet looks like some sort of cybernetic implant (since it has Reconfigure), and it’s Lifelink keyword makes a great additional feature for our new friend, especially since Monks are front-liners, but also kinda squishy.

After some digging (on Gatherer), we also discovered cards from the older Kamigawa sets and lore related to the denizens of Takenuma Swamp (it’s now Takenuma, Abandoned Mire), and used that to flesh things out further. 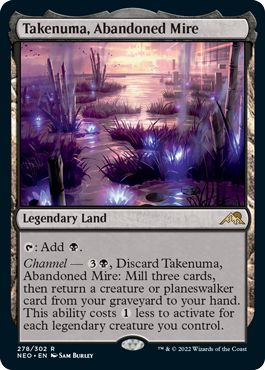 Our end goal was to create a sub-class (a Monastic Tradition) that could showcase some of the cards’ functions, while also filling in gaps in the Monk’s design space and giving the Monk, which is commonly viewed as one of the weakest and most unfulfilling classes in the D&D 5E roster, some serious love.

Here’s what we eventually ended up with:

Way of the Biting-Palm Features

As a bonus action, you can spend 1 ki point to awaken the dreadful, fanged maw grafted onto your palm for 1 minute.

When you do so, you can force each creature of your choice within 10 feet of you to make a Wisdom saving throw. On a failed save, a creature becomes frightened of you for as long as your Menacing Maw persists. The frightened creature can repeat this saving throw at the end of each of its turns, ending the effect on itself on a success. The range of this effect increases to 20 feet at 11th level, and 30 feet at 17th level.

While your fanged maw is active, it is treated as an extension of your body. You can make unarmed strikes with it, and its damage type is piercing or psychic (your choice).

You gain proficiency in either a poisoner’s kit or thieves’ tools, and proficiency in one of the following skills of your choice: Arcana, Nature, Sleight of Hand, or Stealth.

Once on each of your turns, when you hit a creature with your fanged maw, you can expend 1 ki point to gain temporary hit points equal to one roll of your Martial Arts die + your Wisdom modifier.

At 17th level, the temporary hit points you gain increases to two rolls of your Martial Arts dice + your Wisdom modifier.

Once on each of your turns, when you hit a creature with your fanged maw, you can expend 5 ki points to replicate the effects of dispel magic on the creature. Wisdom is your spellcasting ability for this feature.

If there are spell effects on the creature, you can force it to make a Wisdom saving throw. On a failed save, it takes 1d6 psychic damage for each spell effect on it that you end, or half that amount on a successful one.

When an ally you can see hits a creature with a melee attack, you can use your reaction to move your speed toward that creature. Until the end of your next turn, your unarmed strikes against that creature have advantage.

When you cast dispel magic using your Shred Spell feature, you can expend additional ki points to increase its spell level. For every 1 extra ki point you spend, its spell level increases by 1.

In addition, a creature that takes psychic damage from your Shred Spell feature also has its speed reduced to 0 until the start of your next turn.

Be sure to let us know if you decide to use this Monk sub-class at the D&D table. We’d love to hear about your adventures, and your feedback! Tell us on our socials (either Facebook or Twitter), or chat with us on Discord! 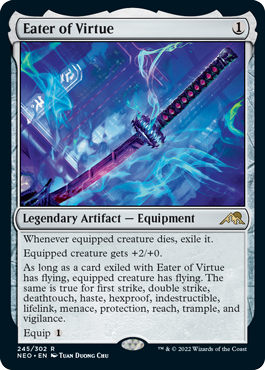 We’ll also be working on a companion article featuring the Eater of Virtue, a Warlock iteration of the Biting-Palm Ninja (the Leech Patron), and our take on a Shrine tribal Commander deck (since we opened quite a few shrines), so be sure to check back soon!

If you think there’s a creature in this set that could use the 5E treatment, let us know as well. We’d love to take a shot at it!

Kamigawa: Neon Dynasty releases18th Feb 2022, and will be available at your favorite local game stores.